Conduct a Search on Police Need No Special Permission

You are here:
BeritaPSHK dalam Berita 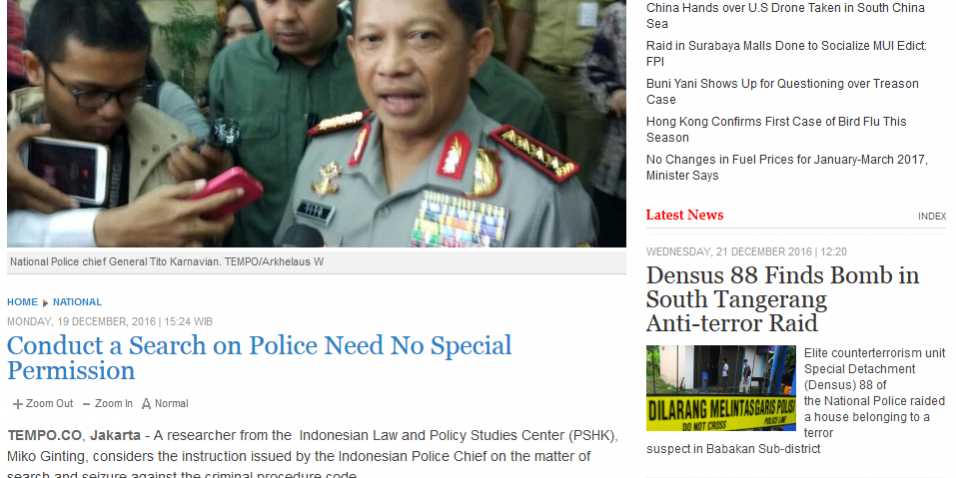 TEMPO.CO, Jakarta – A researcher from the  Indonesian Law and Policy Studies Center (PSHK), Miko Ginting, considers the instruction issued by the Indonesian Police Chief on the matter of search and seizure against the criminal procedure code.

A telegram issued by the National Police on December 14, 2016, to the members of the police force, said that other institutions other than police that wish to conduct a search and seizure on police personnel involved in a litigation must have the police chief’s permission.

The institutions include the Judiciary, the Corruption Eradication Commission (KPK), and the Courts, etc.

“The search and seizure is a forceful measure regulated in the Criminal Procedure Code (KUHAP) and other laws that regulate the criminal procedure law outside of the KUHAP,” Miko said in his written statement on Monday, December 19, 2016.

Conducting a search and seizure, according to Miko, does not need any form of permission from the Police Chief. KPK’s Law even dictates that seizures enacted by KPK are excluded from provisions regulated in the KUHAP.

According to Miko, in the case of corruption crime, the matter can be considered as obstruction of justice based on Article 21 of the Corruption Eradication Law.