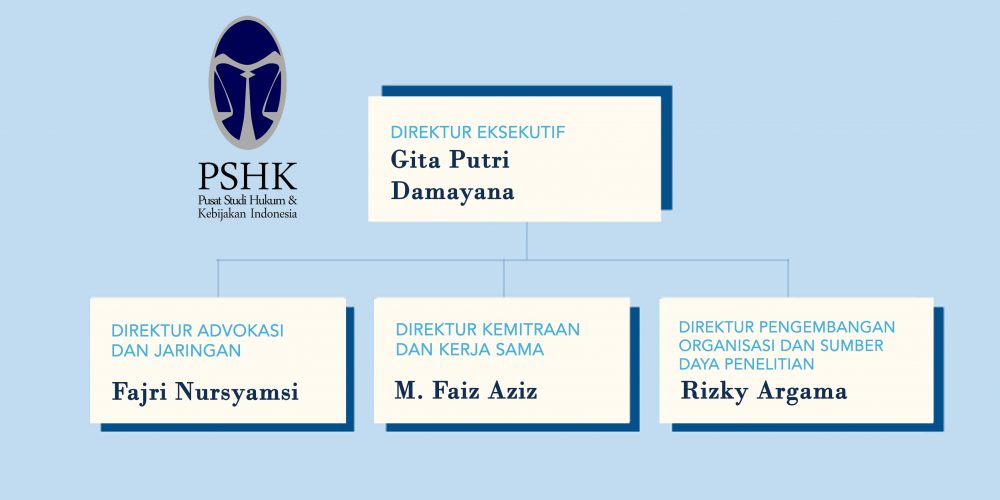 Legislative assessment is carried out with methods and standards that are continuously being developed, including the achievements of quantity, quality, and compliance within legislation procedures. The assessment is carried out at the end of each year and at the end of the parliamentary working period (5 years) and presented in various forms, such as books, infographics, and videos. Based on this experience, PSHK developed a module for the design of laws and regulations which also contains theories and tips for designing laws and regulations that are friendly to the public. To date, the module has become a reference in PSHK’s work in drafting legislative regulations, as well as providing various related training.

In the field of justice. PSHK is consistently involved in the reform agenda at the Indonesian Supreme Court. In 2002-2003, PSHK became part of the assistance team for the preparation of the Supreme Court Reform Blueprint. The move continued in 2005 when PSHK was involved in making the corruption court administrative guidelines. Furthermore, from 2011 to 2012, PSHK was involved in four reform agendas in the Supreme Court, namely the preparation of a standardized court report manual, judiciary website assessment, public service standards in the court, and corruption court administrative standards. Most recently, in 2015, PSHK also took part as a member of the working group (pokja) drafting the Supreme Court Regulation No. 2 of 2015 concerning the Small Claims Court Procedure.

In addition, there are also several PSHK studies with themes outside the field of legislation and justice. Some of them convinced that research on the Presidential Decree deviation in 1998, the responsibilities of the legal profession in 2000, the BRR Aceh blueprint in 2005, and the cultural legal framework of the Republic of Indonesia in 2008.

PSHK earlier works include research on Presidential Decree by former President Suharto in 1998, the study on the legal profession in Indonesia in 2000 and the legal framework for cultural policy in 2009.

In the last 5 years, PSHK continues to initiate regulatory reform through their work with the National Development Planning Agency (Badan Perencanaan Pembangunan Nasional/Bappenas) on their Background Study on Regulatory Reform on their Long Term Development Planning 2019-2023. PSHK also works together with the Corruption Eradication Commission (Komisi Pemberantasan Korupsi/KPK) on drafting the Guidelines on Money Laundering and Asset Recovery on Capital Market. In 2019, PSHK working together with Lubis Ganie Surowidjojo, hukumonline and Barunastra finishes The Legal Framework and Government Institutional Landscape of The Fisheries Sector in Indonesia, supported by The David and Lucille Packard Foundation.

In line with these principles, PSHK has the maximum commitment to carry out each of its activities in a transparent and accountable manner. Financial management in PSHK is carried out based on a strict internal Standard Operating Procedure based on Financial Accounting Standard Guidelines No. 45 (PSAK-45).

We work by these values;