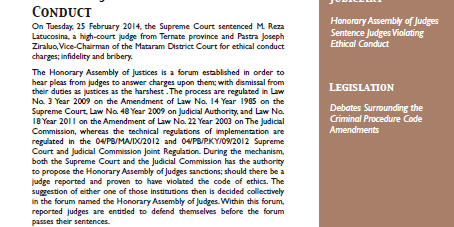 On both cases, the same type of sentences were given, yet with different scales. Latuconsina was given a non-job sentencing and will not receive allowance for two years, while Ziroalu was also given the same non-job sentencing and no allowance for two years. These sentences are of a lower scale compared to the recommendations from the Judicial Commission, which was dishonorable discharge. (FN)

In the upcoming weeks, LRWD will issue specific articles that will discuss contextual concerns regarding the Criminal Procedure Code Amendments. This article in Edition 8 will serve as the initial issue.

Discussions regarding the Criminal procedure Code amendment substance have generated distinct opinions on whether or not it is significant to revise, although, both still depart from an identical starting point; the protection of human rights and the eradication of corruption. The argument of those who oppose is that the revision in the Criminal Procedure Code will weaken the authority of the Corruption Eradication Commission, thus putting a negative light on efforts in corruption eradication.

Main points of the opposing arguments especially on  the existence of preliminary examination judges, acquittals that cannot be appealed, and cassation verdicts that may not exceed penalties set by previous trials. On the other hand, these same arguments have strengthened consent towards the amendments; that revisions will in fact reduce the practice of corruption, especially in the police force and in the judiciary.

The fact is that the Criminal Procedure Code (Law No. 8 Year 1981) is now incapable of accommodating the needs of protecting rights, be it of the offenders, witnesses, or even victims. In addition, the Criminal Procedure Code has opened a wide door towards abuse of authority practices, which will ultimately lead to corruption practices in the justice sector.  Confirming a suspect is often used as a means of blackmailing, arresting without sufficient proof, up to the ineffective  (pre-trial) complaining mechanism, are just a few of the many examples from practices at this moment. Therefore, supporting the amendment should still be pursued, though not by the current members of House of Representatives who still hold office. (MSG)