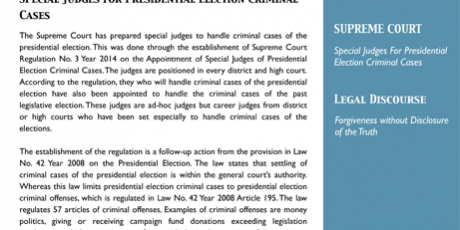 Forgiveness without Disclosure of the Truth

Indeed, there were was still  no agenda to set-up a human rights ad-hoc court  in order to prosecute the case, so any responsibilities and involvement for the actors are still vague. However, the decision from the Honorary Council of Officers (Dewan Kehormatan Perwira/DKP) states that Prabowo Subianto has been found guilty and has been dismissed from position in the Indonesian National Army. The next step follow should be the establishment of a human rights court by the Government.

A set of  regulations such as Law No. 39 Year 1999 on Human Rights and Law No. 26 Year 2001 on the Human Rights Court should suffice  to investigate human rights violations. This means that the incompletion of human rights violation cases is more directed to the second condition; lack of political will. This factor has surfaced since the early stages of the investigation by the Human Rights National Commission (Komisi Nasional Hak Asasi Manusia/KOMNAS HAM), which was not considered a pro justicia investigation. The consequences is the absence of legal mechanisms and not being forwarded to the investigation and prosecution stage by the Attorney General. The stagnant investigation process of the 1998 case was caused by the alternating of case files between the two institutions. Even though the KOMNAS HAM investigation is in fact pro justicia, the key is still held by the Attorney General who, structurally, is below the President.

Similar to establishing the Human Rights ad hoc court that needs a Presidential Decree. Should must be noted that for the 1998 case, the House of Representatives has already issued a recommendation for the President to establish an Adhoc Human Rights Court, search for the thirteen missing activists, provide rehabilitation and compensation to families of victims, and ratify the convention on anti enforced disappearances. To this day, none have been enacted by the current President Susilo Bambang Yudhoyono . This condition shows that political interests are still dominant in the completion of human rights matters in Indonesia. (MSG)

The appointing of special judges to hear criminal cases of the presidential election is a step in the right direction to expedite the settling process. However, unfortunately, this regulation does not set provisions on the qualifications of the judges. This is needed in order for the judges handling the cases to have competence towards both general and technical regulations in the Indonesian general elections. Such condition can only be obtained by regulating an organized specialized training for the appointed judges. The court’s role is crucial in maintaining the smooth implementation and quality of the election results. (MNS)