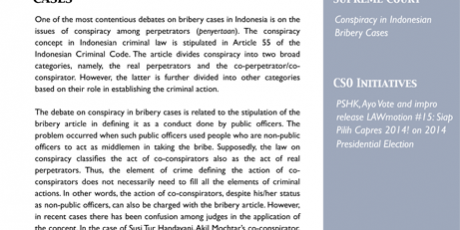 One of the most contentious debates on bribery cases in Indonesia is on the issues of conspiracy among perpetrators (penyertaan). The conspiracy concept in Indonesian criminal law is stipulated in Article 55 of the Indonesian Criminal Code. The article divides conspiracy into two broad categories, namely, the real perpetrators and the co-perpetrator/co-conspirator. However, the latter is further divided into other categories based on their role in establishing the criminal action.

The debate on conspiracy in bribery cases is related to the stipulation of the bribery article in defining it as a conduct done by public officers. The problem occurred when such public officers used people who are non-public officers to act as middlemen in taking the bribe. Supposedly, the law on conspiracy classifies the act of co-conspirators also as the act of real perpetrators. Thus, the element of crime defining the action of co-conspirators does not necessarily need to fill all the elements of criminal actions. In other words, the action of co-conspirators, despite his/her status as non-public officers, can also be charged with the bribery article. However, in recent cases there has been confusion among judges in the application of the concept. In the case of Susi Tur Handayani, Akil Mochtar’s co-conspirator, all judges refused to apply the article on judge bribery because Susi Tur Handayani is not a judge. This reason is not necessarily correct, because based on the conspiracy concept, the act of Susi Tur Handayani was on behalf of Akil. Thus, the article of receiving bribery as a judge can also be charged.

The confusion is not without context. The application of the conspiracy article has been heavily criticized in the case of Luthfi Hasan Ishak, where Luthfi’s co-conspirator, Ahmad Fathanah, was considered as public officer due to his connection with Luthfi. However, in one decision, the judges have precisely argued that between Luthfi and Fathanah, they found a unity of motive (kesatuan motif). Therefore, the act of Fathanah can also be considered as the act of Luthfi as a public officer. (GAT)

Next week, on Wednesday, 9 July 2014, Indonesia will hold its third direct Presidential Elections. Despite the problems seen in this year’s campaigning between the two parties (such as the notorious black campaigning), there are still a number of people who have yet to make up their mind on who to choose. LAWmotion #15 – Siap Pilih Capres 2014! (Ready to Choose the 2014 Presidential Candidate!) is an initiative from PSHK, Ayo Vote, and impro, to inform and remind voters of the Indonesian President’s role and responsibilities, along with steps they should consider before deciding which candidate to choose. This LAWmotion is a follow-up to its predecessor, LAWmotion #10 – Bekali Diri untuk Pemilu 2014 (Equip Yourself for the 2014 General Elections), that became popular during the Legislative Election.

In order to decide on the country’s fate, it is essential to know firsthand the duties and authorities of the President of Indonesia based on the 1945 Constitution. Remember, whoever is sworn in as President will have to undertake those duties and authorities as the leader of the Government. Being President is much more than occupying a certain position; the President will receive a certain amount of power, which can be used solely or together with other state agencies (i.e. the House of Representatives). This power includes within it the authority to enact legislation, lead the armed forces, and even declare war and peace with foreign parties in international relations. It is important to keep this knowledge in mind when considering who will be given this authority and power. Besides reminding us of the future President’s duties and authorities, LAWmotion #15 – Siap Pilih Capres 2014! also recalls the successes of past Indonesian Presidents who have made significant actions towards Indonesia’s democracy and prosperity.

The main message can be found towards the end of the LAWmotion; steps needed to be taken in order to equip ourselves before the election. One must not enter the booth empty-handed. There are three noteworthy steps we are able to take when considering between the candidates. First is to identify their track record and history. Second, their contributions towards important issues such as law enforcement, corruption, and human rights. Finally, the third step is to visit the General Election Commission website (www.kpu.go.id) as an official and valid source of information. By following these three simple steps, it shouldn’t be too difficult for voters to decide a fitting President for Indonesia. (AW)