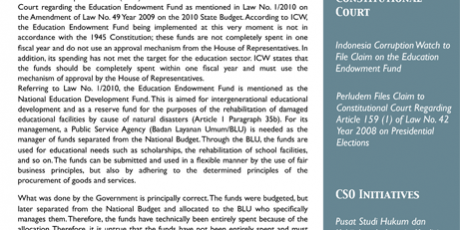 Indonesia Corruption Watch (ICW) intends to file a suit before the Constitutional Court regarding the Education Endowment Fund as mentioned in Law No. 1/2010 on the Amendment of Law No. 49 Year 2009 on the 2010 State Budget. According to ICW, the Education Endowment Fund being implemented at this very moment is not in accordance with the 1945 Constitution; these funds are not completely spent in one fiscal year and do not use an approval mechanism from the House of Representatives. In addition, its spending has not met the target for the education sector. ICW states that the funds should be completely spent within one fiscal year and must use the mechanism of approval by the House of Representatives.

Referring to Law No. 1/2010, the Education Endowment Fund is mentioned as the National Education Development Fund. This is aimed for intergenerational educational development and as a reserve fund for the purposes of the rehabilitation of damaged educational facilities by cause of natural disasters (Article 1 Paragraph 35b). For its management, a Public Service Agency (Badan Layanan Umum/BLU) is needed as the manager of funds separated from the National Budget. Through the BLU, the funds are used for educational needs such as scholarships, the rehabilitation of school facilities, and so on. The funds can be submitted and used in a flexible manner by the use of fair business principles, but also by adhering to the determined principles of the procurement of goods and services.

What was done by the Government is principally correct. The funds were budgeted, but later separated from the National Budget and allocated to the BLU who specifically manages them. Therefore, the funds have technically been entirely spent because of the allocation. Therefore, it is untrue that the funds have not been entirely spent and must be submitted for approval to the House of Representatives. In fact, the approval has actually been obtained at the time of the 2010 National Budget approval.

The Indonesia Corruption Watch (ICW) intention in filing the lawsuit will have a serious effect towards at least two sectors in Indonesia; education and state financial management. State financial regulations in the form of Law No. 17 Year 2003 and Law No. 1 Year 2004 have so far been the result of state finance management reform for the sake of management effectiveness and efficiency. If the Constitutional Court grants the lawsuit intended by ICW, we believe a decline on the management of Indonesian state finances and education is possible. (MFA)

Perludem Files Claim to Constitutional Court Regarding Article 159 (1) of Law No. 42 Year 2008 on Presidential Elections

On 3 July 2014, the Constitutional Court granted a judicial review request towards article 159 paragraph (1) of Law No. 42 Year 2008 on the Presidential Election. The Association for General Elections and Democracy (Perkumpulan untuk Pemilu dan Demokrasi/Perludem) has stated that there is a matter of legal uncertainty regarding the mentioned law. With only two pairs running in this year’s Presidential Election, the public have potential to become apathetic towards the second round of election. Therefore, Perludem submitted their argument which aims to make the Presidential Election just one round. Alongside the judicial review submitted by Perludem, two other parties also submitted towards the same article, one of them being the Forum of Constitutional Lawyers.

In his request, Andi Asrun, who represented the Forum of Constitutional Lawyers, explained that the provision is a part of the legal construction established along with Article 6A paragraph (3), Article 6A paragraph (4) of the 1945 Constitution and Article 159 paragraph (2) of the Law on the Presidential Election. The construction implicitly anticipates that there are more than two pairs of candidates, so the two pairs with the most votes continue onto the second round. Another requesting party, Sunggul Hamonangan Sirait and Haposan Situmorang, questions the legal basis used by the General Elections Commission (Komisi Pemilihan Umum/KPU) in determining the victors of the 2014 Presidential Election. They argue that Article 159 paragraph (1) is not a valid basis in the implementation of the Presidential Election. This is due to the absence of clear rules on the execution of the 9 following July Presidential Election. Sunggul assesses that the implementation of the election becomes unconstitutional if no pair of candidates meet the vote count distribution done by the KPU.

The Constitutional Court’s main argument is regarding the nomination stage; the chosen two pairs of candidates have met the representation requirements from each province in Indonesia. This means that, according to the decision, the requirement of 20% of votes from half the number of provinces in Indonesia will no longer apply. (GPD)

“The Bill on Culture was established upon a paradigm of fear and recognition that our culture is vulnerable,” says M. Abduh Aziz as the Chairman of the Indonesian Arts Coalition (Koalisi Seni Indonesia/KSI) and speaker in the public discussion entitled The Bill on Culture: Ensuring or Convicting? He feels that the foundation of the bill’s establishment quite influences the content of the Bill on Culture, which was presented at an event at Galeri Cipta II, Taman Ismail Marzuki on July 3, 2014.

a troubling paradigm, M. Abduh Aziz explains that the bill gives the government a central role in managing culture, which puts aside society participation. In fact, society is the driving force of culture itself. In addition, there is also the forming of the Culture Protection Commission whose duty is to somewhat guard and filter the Indonesian culture from negative impacts. This is quite troubling.

Other speakers include Reni Marlinawati (Commission X of the Indonesian House of Representatives), Prof. Dr. Kacung Marijan, Ph. D. (Director General of Culture of the Indonesian Ministry of Education and Culture), and Dr. Hilmar Farid (academician). Dr. Hilmar Farid emphasizes “this Bill on Culture continues on the New Order regime tradition that only produces something to be enjoyed personally; not reaching out to all layers of society. This discussion is a gateway to other discussions relating to the Bill on Culture, just as stated by Reni Marlinawati. Audience response was varied even until the end of the event, which drove M. Abduh Aziz to say that “Today’s target was achieved because people are discussing substantial matters of culture.” (APH)