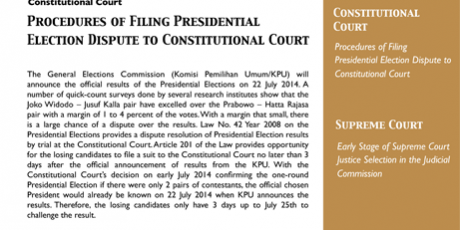 The General Elections Commission (Komisi Pemilihan Umum/KPU) will announce the official results of the Presidential Elections on 22 July 2014. A number of quick-count surveys done by several research institutes show that the Joko Widodo – Jusuf Kalla pair have excelledover the Prabowo – Hatta Rajasa pair with a margin of 1 to 4 percent of the votes. With a margin that small, there is a large chance of a dispute over the results. Law No. 42 Year 2008 on the Presidential Elections provides a dispute resolution of Presidential Election results by trial at the Constitutional Court. Article 201 of the Law provides opportunity for the losing candidates to file a suit to the Constitutional Court no later than 3 days after the officialannouncement of results from the KPU. With the Constitutional Court’s decision on early July 2014 confirming the one-round Presidential Election if there were only 2 pairs of contestants, the official chosen President would already be known on 22 July 2014 when KPU announces the results. Therefore, the losing candidates only have 3 days up to July 25th to challenge the result.

The Constitutional Court then has 14 days to examine and decide over the Presidential Election results dispute. The trial will be conducted open to the public by presenting the candidates who filed the suit as the applicant, the KPU as the defendant, and the other pair of candidates as the related party. If the plea is granted, the Court will annul the official results by the KPU and determine a correct count of the votes. Conversely, the Court will reject the plea if it is considered unwarranted. (RA)

During the series of the selection process, many interesting stories emerged. For example; Muslich Bambang Luqmono, who confessed not owning a house and has been going to work by bicycle all this time, and James Butarbutar, who does not agree with judges going on strike. There’s also Ansori, who isn’t able to explain the procedure of a Judicial Review; plus Didin Fathudin and Purwosusilo who uncovered the rampant practices of bribery within the religious courts. One name that has been in the spotlight is Sudrajat Dimyati. During theprevious selection, he was accused of lobbying with House of Representatives member, Bahrudin Nasori. Bahrudin was then dismissed from the Law Commission of the House of Representatives, and Sudrajat was disqualified from the Supreme Court Justice selections. Lately, the Judicial Commission has stated that there is no evidence of Sudrajat doing such lobbying.