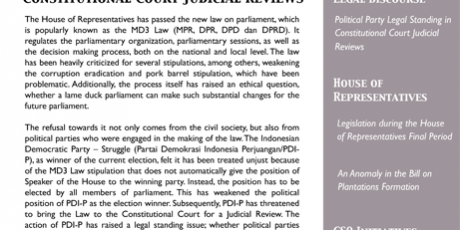 MD3 Law: A Setback for the Indonesian Parliament

An example of the House’s lack of commitment is by erasing the obligation of political parties to conduct performance evaluations towards their members and reporting the results to the public (previously regulated in Article 80 paragraph (2) of the MD3 Law). The obligation of the House in reporting its budget management to the public in the annual performance report (Article 73 paragraph (5) of the MD3 Law) has also been erased. The State Finance Accountability Committee (Badan Akuntabilitas Keuangan Negara/BAKN) as a working unit of the House who sharpens the supervision function towards the use of the national budget has instead being disbanded. Closed-door meetings will also still be upheld by the House.

The Civil Society Coalition for the Amendment of the MD3 Law has issued a publication on its findings and notes towards the MD3 Law. There are several findings, such as the addition of the MPR’s authority that indirectly results in budget swelling, inconsistency in provisions regarding the selection mechanism of DPR leaders, the erasing of the provision regarding women’s representation in the composition of the House’s working units, authority expansion from the Court of Honor (Mahkamah Kehormatan), additional procedures for criminal investigation process towards House members and the obscurity of provisions regarding the constituency development program.

In their recommendations, the Coalition urges the upcoming House members (of the 2014-2019 period) to revise the MD3 Law, particularly to sterilize it from the effects of the 2014 Presidential Election scramble and several other agendas that tend to not significantly boost parliamentary reformation. In addition, the Coalition has also requested the upcoming House members not to force themselves to draft a new House of Representative Standing Orders (Tata Tertib DPR). Besides an inadequate amount of time because only one period remains (14 August—30 September 2014), the new MD3 Law is trapped by political interests as the effect of the 2014 Presidential Election scramble. (RR)

The House of Representatives has passed the new law on parliament, which is popularly known as the MD3 Law (MPR, DPR, DPD dan DPRD). It regulates the parliamentary organization, parliamentary sessions, as well as the decision making process, both on thenational and local level. The law has been heavily criticized for several stipulations, among others, weakening the corruption eradication and pork barrel stipulation, which have been problematic. Additionally, the process itself has raised an ethical question, whether a lame duck parliament can make such substantial changes for the future parliament.

The refusal towards it not only comes from the civil society, but also from political parties who were engaged in the making of the law. The Indonesian Democratic Party – Struggle(Partai Demokrasi Indonesia Perjuangan/PDI-P), as winner of the current election, felt it has been treated unjust because of the MD3 Law stipulation that does not automatically give the position of Speaker of the House to the winning party. Instead, the position has to be elected by all members of parliament. This has weakened the political position of PDI-P as the election winner. Subsequently, PDI-P has threatened to bring the Law to the Constitutional Court for a Judicial Review. The action of PDI-P has raised a legal standing issue; whether political parties who have been engaged in the process of law making and failed to fight for their aspiration in the law can obtain legal standing as a party in the judicial review towards the law in question?

From a legal normative point of view, such action is possible because the Constitutional Court (Mahkamah Konstitusi/MK) in many of its decisions has given a broad definition to any legal entities as a legitimate party to petition a law in the judicial review process. However, in one of its decisions, the MK questioned the position of a parliamentary member in giving testimonies as a judicial review petitioner by citing that the argument given was irrelevant to court. This is because the member was given a chance in putting forward his aspiration directly in many parliament sessions and debates. Thus, following the argument, the MK alsoneeds to question the legal standing of PDI-P and rule out PDI-P’s standing to petition the MD3 Law. In doing so, the MK has prevented itself from possible complications in the future, where every political party who has lost in parliament goes to the MK. (GAT)

Legislation during the House of Representatives Final Period

The last session of the House of Representatives will be held from 16 August 2014 until 30 September 2014; a total of 32 working days. Therefore, even though they have entered the last session, the legislative process still needs to be continuously monitored by the community. (FN)

An Anomaly in the Bill on Plantations Formation

One of the Bills passed as the House of Representatives proposal initiatives of Session III of the 2013-2014 Period was the Bill on Plantations. This bill is an amendment of Law No. 18 Year 2004 on Plantations.

Normally, a bill which will be discussed will firstly enter the annual National Legislation Program (Program Legislasi Nasional/Prolegnas). However, it turns out that the Bill on Plantations was not entered in the priority list of the Prolegnas. A bill is able to be discussed without entering the Prolegnas if it fulfills one of the following five conditions; ratification of an international treaty, follow-up of Constitutional Court (Mahkamah Konstitusi/MK) Decision, regulates on the State Budget, the establishment of new territories, and the establishment of a Government Regulation in Lieu of the Law (Peraturan Pemerintah Pengganti Undang-Undang/Perppu) into a Law.