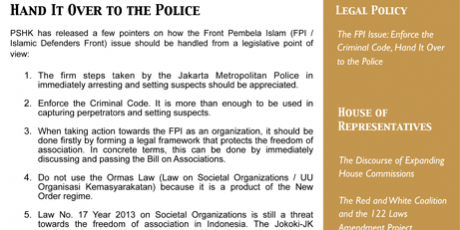 The FPI Issue: Enforce the Criminal Code, Hand It Over to the Police

PSHK has released a few pointers on how the Front Pembela Islam (FPI / Islamic Defenders Front) issue should be handled from a legislative point of view:

The Discourse of Expanding House Commissions

While implementing of those functions, the commissions are also equipped with the right of interpellation, right of inquiry, and right towards freedom of expression.

Rejections become more evidently sharp when the proposal for commission expanding option was associated with elections process of the commission leaders, which is done by a package system based on Article 97 paragraph (2) of the MD3 Law and Article 57 paragraph (2) of the Standing Orders. Even so, the idea of commission expansion does not always have to be rejected when set in the framework of raising productivity and effectiveness towards the House of Representatives’ performance, especially regarding the supervision and legislative functions.

Therefore, the proposal for commission expansion at the current House of Representatives should not merely be set in a political framework, but there should also be deep and thorough study on the needs and work load of the House of Representatives. The argument that the current House of Representatives’ enormous workload is affecting their performance makes sense. For example, Commission I handles at least four fields of work; international relations, intelligence, defense, and telecommunications and informatics. Stronger adjustments are needed for the House of Representatives members in order to master all four fields. Regarding partners, for example; Commission I and II have up to 14 partners each. In addition, there should also be a cost-benefit analysis regarding commission expansion, starting from increased focus and performance effectiveness, up to the addition of infrastructure such as rooms, staffs, and secretarial tools. Therefore, it is necessary to consider whether it is better off to add commissions or reactivate sub-commissions that perform temporarily based on issues at hand. In order to reduce the element of political ration distribution, the election of commission leaderships based on the package system in the MD3 Law and Standing Orders should preferably pay attention to their experience, competence, and capabilities. In addition, of course, the House of Representatives preferably should wait and adjust the commissions with the cabinet structure and posture of Jokowi-JK, which is still being compiled. (MSG)

Public involvement should be considered as a vital indicator in achieving quality laws. The involvement should not be seen as mere formality, but also as how arising aspirations can be managed. Therefore, it is important for the Red and White Coalition to immediately release the names of the 122 laws in order to receive public response. Legislation should be put in the public domain instead of merely being consummed by the elite. (MS/ED)