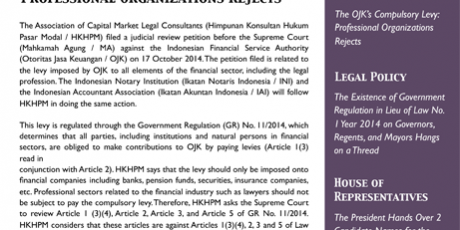 This levy is regulated through the Government Regulation (GR) No. 11/2014, which determines that all parties, including institutions and natural persons in financial sectors, are obliged to make contributions to OJK by paying levies (Article 1(3) read in conjunction with Article 2). HKHPM says that the levy should only be imposed onto financial companies including banks, pension funds, securities, insurance companies, etc. Professional sectors related to the financial industry such as lawyers should not be subject to pay the compulsory levy. Therefore, HKHPM asks the Supreme Court to review Article 1 (3)(4), Article 2, Article 3, and Article 5 of GR No. 11/2014. HKHPM considers that these articles are against Articles 1(3)(4), 2, 3 and 5 of Law No.21/2011 on the OJK.

The definition of financial service institutions in Law No. 21/2011 is ambiguous. The article provides the word “financial services institution”, however, the coverage of that institution is too broad. The judicial review focus is to demand a cancellation of the OJK levy provision to professional sectors in the financial industry. HKHPM considers that professional sectors, including lawyers, are not part of the financial industry’s core. Article 1(3) of Law No. 21/2011 becomes the parameter used by HKHPM. This article states that Financial Service Institutions is an institution conducting activities in banking, securities market, insurance, pension funds, financing institutions, and other financial activities. Is such a parameter correct? We still have to wait what the Supreme Court will decide on in this petition.

The Existence of Government Regulation in Lieu of Law No. 1 Year 2014 on Governors, Regents, and Mayors Hangs on a Thread

The Head of Local Government Elections controversy has entered a new stage. After intense political drama in House of Representatives (Dewan Perwakilan Rakyat / DPR), who passed Law No. 23 Year 2004 on Head of Local Government Elections, the President passed Government Regulation in Lieu of Law (Peraturan Pemerintah Pengganti Undang-Undang / Perppu) No. 1 Year 2014 on Governors, Regents, and Mayors. The passing of the Perppu has created confusion among public. It reflects the then President Yudhoyono’s inconsistency towards the head of local government issues. Previously, Gamawan Fauzi, then-the Interior Minister on behalf of President Yudhoyono has agreed on the passing of Law No. 23 Year 2004 on Governors, Regents, and Mayors. The law has given back the power to elect heads of local governments to local parliaments, as opposed to previous system, which gave the power to the people through popular vote. However, due to fierce public rejection to the Law, Yudhoyono then overturned the Law in favoring public demand in voting for heads of local governments by enacting the Perppu.

Although the Perppu has given back the popular vote system in electing heads of local governments, as a legal instrument, the Perppu is the correct legal measurement. Article 22 Par. 2 of the Indonesian Constitution stipulate that the Perppu needs to be approved by the House of Representatives in their next session, to become full Law; if the House refuses to accept the Perppu into law, thus the effect is the Law No. 23 Year 2004 will be imposed again. Apart from the House’s political composition between the opposing and supporting of the local parliament vote system and popular vote system, the problem with the enactment of Perppu is also related to the question whether the President has a sufficient objective condition in passing the Perppu. The Indonesian Constitution gives the power of the Perppu as subjective power from the President. Unfortunately, the condition surrounding the birth of the Perppu did not qualify the objective test. Additionally, in recent constitutional law development, the Constitutional Court can also test the validity of the constitution. It will become a further challenge for the Perppu to make it through the process in the Constitutional Court, if any.

The Selection Committee for the Corruption Eradication Commission (KPK) Leadership has completed their task. Since August of this year, the Selection Committee, which was formed by President Susilo Bambang Yudhoyono (SBY), has conducted five steps in the selection process; administration selection, papers selection, profile assessment selection, health selection, and the interview selection. At the beginning of the process, there were 104 names and already narrowed down to the final two; Roby Arya Brata dan Busyro Muqoddas. Based on Article 30 paragraph (10) and Constitutional Court Decision No. 005/UUP-IX/VI/2011, the House of Representatives must choose one of the two names by three months at the latest after receiving them from the President.

Pusat Studi Hukum dan Kebijakan Indonesia (PSHK) and the Civil Society Group for Anti Corruption has also participated conducting a track record to asses the candidates as to ensure the safeguarding of the selection process. At the moment, Roby Arya Brata is currently holding the position as Head of International Relations of the Cabinet Secretary. He is known as an anti-corruption activist through his books, articles, and opinions that published in the media. As for Busyro Muqqodas, he is currently the Vice Chairman of KPK, whose tenure will end in December 2014 and is currently running for re-election.

The final step in the election process of the two names will be the fit and proper test at the House of Representatives. Next year, four other KPK commissioners will end their tenures, therefore whoever is chosen to head the commission will have to start leading during that transitional phase. (MS)

Ever since its ratification on 8 July 2014, Law No. 17 Year 2014 on the People’s Consultative Assembly, House of Representatives, House of Regional Representatives and Regional House of Representatives (UU MD3 / MD3 Law) has reaped a lot of rejection from the public. The law accommodates 428 Articles that are an amendment of Law No. 27 Year 2009. The new MD3 Law should have actually intensified the provisions of the previous regulations. But, the content of it has broadened the House’s authority excluding the public supervision. Three months afterwards,parties filed a petition to the Constitutional Court due to the material it contains. The Indonesian Democratic Party of Struggle (Partai Demokrasi Indonesia Terpimpin / PDIP) questions the House leadership’s mechanism considered as detrimental towards PDIP as a winning political party. However, the Constitutional Court has rejected the claim with a consideration that the mechanism itself has become the authority of chosen members as legislators to regulate. The Constitutional Court also decided that political parties have no legal standing in filing a petition. Besides PDIP, the Regional House of Representatives (DPD) has also filed a petition towards Article 21, which they see as weakening their position. The legislative function of the DPD as decided through Constitutional Court Decision No. 92 PUU-X/2012 is not accommodated in the Law. The latest process from the DPD’s petition is the hearing of expert testimonies on 21 October 2014.

Others who petitions the MD3 law includes The Courts Reform Society (Perkumpulan Masyarakat Pembaruan Pengadilan) and a number of activists on the provision of investigating House members related to criminal offenses. Article 245 paragraph (1) of the MD3 Law states “The summoning and inquiries of an investigation towards House members that have been alleged of crime should obtain a written approval by the Court of Honor.” Such provision violates the principle of equality before the law; stated in Article 27 paragraph (1) of the 1945 Constitution. In addition, a written approval from the Court of Honor that includes a 30-day period is a loophole for destroying evidence. From the perspective of independence of the judicial power, Bivitri Susanti, a researcher from PSHK, gave an opinion as expert during the trial in the Constitutional Court. In her opinion, Bivitri states that written approval from the Court of Honor will delay the legal process and is not appropriate to be implemented in the context of independence of judicial power.

Other petitions came from the Association for Elections and Democracy (Perkumpulan untuk Pemilu dan Demokrasi / Perludem) and a number of women’s right’s activists regarding the deletion of the provision on women’s representation in leadership positions in the House of Representatives working units. This matter shows that there is no commitment in providing equal opportunities towards women members to obtain leadership positions. However, with women obtaining strategic positions in the House of Representatives, the policy drafts related to women can be further supported to become a legislative priority. The judicial review process regarding women’s representation is still ongoing. The poor state of legislation reflected by the MD3 Law has become a signal for the public to be more vigilant in guarding safeguarding the legislation process of the upcoming 2014-2019 period of House of Representatives. (ED)