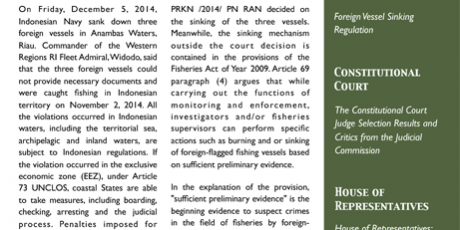 On Friday, December 5, 2014, Indonesian Navy sank down three foreign vessels in Anambas Waters, Riau. Commander of the Western Regions RI Fleet Admiral, Widodo, said that the three foreign vessels could not provide necessary documents and were caught fishing in Indonesian territory on November 2, 2014. All the violations occurred in Indonesian waters, including the territorial sea, archipelagic and inland waters, are subject to Indonesian regulations. If the violation occurred in the exclusive economic zone (EEZ), under Article 73 UNCLOS, coastal States are able to take measures, including boarding, checking, arresting and the judicial process. Penalties imposed for violations on fisheries laws and regulations in the EEZ may not include imprisonment or other corporal punishment. Therefore, if the regulation specifies a sinking penalty for foreign vessels fishing illegally, such action does not conflict with existing laws.

The sinking of the three foreign vessels was done through a judicial process. According the District Court of Ranai through Determination Letter No. 18, 19, and 20/PEN.PID PRKN /2014/ PN RAN decided on the sinking of the three vessels. Meanwhile, the sinking mechanism outside the court decision is contained in the provisions of the Fisheries Act of Year 2009. Article 69 paragraph (4) argues that while carrying out the functions of monitoring and enforcement, investigators and/or fisheries supervisors can perform specific actions such as burning and or sinking of foreign-flagged fishing vessels based on sufficient preliminary evidence.

On December 2, 2014, the selection committee lead by Supreme Court Vice Chairman on Judicial Sector, Suwardi, announced two newly selected Constitutional Court Judges namely Suhartoyo and Manahan MP Sitompul. Suhartoyo is currently serving as Denpasar High Court Judge and Manahan is vice chairman of Bangka Belitung High Court. Both will replace Justice Ahmad Fadlil Sumadi who will finish his tenure on January 6, 2015 and M. Alim who will retire on April 21, 2015. Suhartoyo and Manahan have passed several stage of selection which are the administrative, medical, written test and interview.

On the other hand, The Judicial Commission raised their concern on the Selection Committee decision of having Suhartoyo since he was under investigation on his ruling to free Sudjiono Timan a convicted corruptor of 2.2 trillion Rupiah from the Central Bank liquidity assistance. As reported before, Judicial Commission chairman Suparman Marzuki, said that they have initiated an integrity investigation to all candidates and proposed a recommendation to the selection committee. According to Suparman Marzuki, there are only two proper candidates in the race; Ahmad Fadlil Sumadi and Manahan M.P. Sitompul. But the Judicial Commission recommendation was not being taken into consideration by the Selection Committee. Despite there’s no laws attributed to the Judicial Commission to initiate such an investigation, since both Judicial Commission and Supreme Court supposed to work hand in hand on the selection. The Judicial Commission could provide more data to trace the track record of each candidate, such as the data of public reports/tip-offs of the attitude of judges.
The Judicial Commission also criticized the close-method of interview conducted by Selection Committee. It brings suspicion that there is a possibility of applying a different standard given to the candidates during the interview. Moreover, the selection committee also did not request the company of an external party such as any former constitutional court judge or a constitutional law expert, since their experience and expertise could bring a certain depth to the interview process. Article 19 of Law no 24 Year 2003 on Constitutional Court Article 19 of Law No. 24 Year 2003 mandates a transparent and participative process on the Constitutional Court Judge selection. Furthermore, article 20 regulate that the selection mechanism must be objective and accountable. It should be taken into serious consideration that in most of Constitutional Court selections, there were always allegations that the selection committee failed to comply upon accountability principles.

During the first session of the House of Representatives 2014-2015 period that began on October 1, 2014 to December 5, 2014, there were several legislative functions achieved by the House. Among them is the determination of the Bill Amendment Act No. 17 Year 2014 on the MPR, DPR, DPD and DPRD as part of the 2014—2019 Prolegnas, also the enactment of Parliament Regulation No. 3 Year 2014 about the Expert and Administrative Staff Member of House of Representatives.

Also the House manages several public hearings (Rapat Dengar Pendapat Umum) on the Government Regulation in Lieu of the Law (Perppu) on the District Election, Bill of Transportation, Bill of Architects, and Bill on Disability. However, there are still many crucial agendas from the House which still remain unfinished until the start of the recess period on December 6, 2014. Among them is the preparation of the agenda of the National Legislation Program (Prolegnas) from 2015 to 2019 and the Corruption Eradication Commission (Komisi Pemberantasan Korupsi/KPK) leadership selection replacement from M. Busyro Muqoddas, SH, M.Hum.

The House of Representatives should have already completed the preparation of the National Legislation Program (Prolegnas) for 2015-2019 and setting priorities for the discussion of the bill in the next year. The agenda will be discussed along with the government during the next session of the Parliament. The Legislative Council (Badan Legislatif/Baleg) of the House of Representatives are responsible for the discussion and preparation of the Prolegnas but so far the agenda is still conducting a Public Hearing (RDPU) with multiple stakeholders. On November 19, 2014, a public hearing was conducted by the Legislative Council of the House of Representatives with the Indonesian Center for Law and Policies Studies (Pusat Studi Hukum dan Kebijakan Indonesia/PSHK), National Human Rights Commission, and the National Law Commission (Komisi Hukum Nasional/KHN).

On the election of Corruption Eradication Commission (KPK) to substitute M. Busyro Muqoddas, SH, M. Hum who’s tenure ended on December 10, 2014, Commission III of the House of Representatives is responsible for the implementation of the process on December 1, 2014 and held a public hearing with other serving KPK leaders. Then on December 3 and December 4, 2014 the Commission III also conducted the fit and proper test of two KPK Candidates who have been selected by the Selection Committee set up by the Ministry of Justice and Human Rights. The candidates are M. Busyro Muqoddas, SH, M. Hum and Robby Arya Brata. Then on December 4, 2014, after the fit and proper test of Robby Arya Brata, Commission III held an internal meeting to discuss the continuation of the results following the fit and proper test. The results of the internal meeting is the selection of the new leadership of the Commission to replace the leadership of the Commission, after Busyro Muqoddas was done, after entering the next period at the beginning of January 2015, which is between 12 to January 16, 2015.

Commission III has decided, considering there are still some members of the commission who were unable to attend due to one reason or another. In addition, there is still an incomplete internal House agenda, which is the discussions on the Amendment Act No. 17 of 2014 on the MPR, DPR, DPD and DPRD. The deadline for the House for Article 30 paragraph (10) of Law No. 30 of 2002 is up to December 10, 2014. However, since the recess is not counted as part of the House’s three months period, the House still has time up to January 16 to select and set a new KPK chief. However, in the KPK, there will be vacant period of some time on the position of the leadership of the Commission from December 10, 2014, until the House chooses and decides a new one in the beginning of January. (PB)