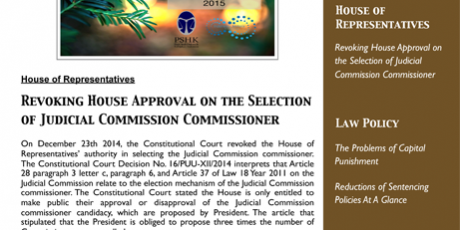 Revoking House Approval on the Selection of Judicial Commission Commissioner

Aside from the Judicial Commission Commissioner selection mechanism, the applicants, Edy Suandi Hamid and Sri Hastuti Puspitasari, both professors in the Islamic Indonesia University I Yogyakarta, also propose that the Constitutional Court test paragraph (1), (10) and (11) of Article 30 of Law 30 Year 2002 on the Corruption Eradication Commission in relation to the commissioner selection mechanism. The Court decided to refuse it since the Corruption Eradication Commission was not formed and regulated by the constitution. (MS)

The Problems of Capital Punishment

Although the debate over death penalty will still and probably continue to happen, both sides seem to agree that the legal procedures in the Indonesian criminal justice system is unable to guarantee a fair trial process. Since the criminal justice system is flawed itself, it would be wise for the Attorney General Office not to seek the death sentence since there are still other forms of punishment available. (MSG)

Reductions of Sentencing Policies At A Glance

Remissions or reductions in sentences towards convicts and criminals were given by Yasona Laoly; the Minister of Law and Human Rights on December 25th 2014. Representing the Government, the Minister gave remissions to 8.900 convicts. Of that number, 49 of them are corruptors. The remission policy was in contrast with his statement on 23 December 2014. He stated that remissions will be given to 8.900 convicts and will not be given especially for the 150 corruptors. Such a contradictory statement and policy made by the Minister begs further inquiry.

In addition, it is necessary to set up the remission in renewal of Law No. 12 Year 1995 on Correctional Framework. It needs to be affirmed that remission (as mentioned in Article 14 (i) of Law No. 12 Year 1995 and its regulation implementations) is not the right, but the authority of the State. In line with the philosophy of remissions and not related with the religion of convict, the remissions should be given on 17 August, the Independence day. The urgency to tighten the remission requirements and procedures include having a clear indicator on ‘good behavior’ since most remissions are based on this. Remission requirements and procedural policies should be rational and are able to be tested from time to time. During the implementation, remission procedures should be thoroughly monitored by having Supervisory and Observer Judges as mandated by Law No. 8 Year 1981 on Criminal Procedure. (MSG)