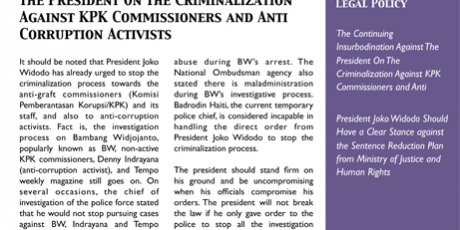 It should be noted that President Joko Widodo has already urged to stop the criminalization process towards the anti-graft commissioners (Komisi Pemberantasan Korupsi/KPK) and its staff, and also to anti-corruption activists. Fact is, the investigation process on Bambang Widjojanto, popularly known as BW, non-active KPK commissioners, Denny Indrayana (anti-corruption activist), and Tempo weekly magazine still goes on. On several occasions, the chief of investigation of the police force stated that he would not stop pursuing cases against BW, Indrayana and Tempo magazine.

The gesture displayed by Budi Waseso exhibits an extreme case of insubordination against the message sent by the President. The term ‘malicious intent’ is easily cemented to the police since they acted in such a condescending manner to those they perceive as opponents. The National Commission on Humans Rights in their statement said that there’s a probable human rights and excessive abuse during BW’s arrest. The National Ombudsman agency also stated there is maladministration during BW’s investigative process. Badrodin Haiti, the current temporary police chief, is considered incapable in handling the direct order from President Joko Widodo to stop the criminalization process.

The president should stand firm on his ground and be uncompromising when his officials compromise his orders. The president will not break the law if he only gave order to the police to stop all the investigation processes against the KPK commissioners and officials, including anti-corruption activists. If the president recedes from taking direct action and measures, the anti-corruption commission will go down to a slow and painful death. During his presidential campaign, Joko Widodo once stated his commitment to support the KPK. At the moment, one could easily spot the President compromising his own words towards strengthening the KPK. (MSG)

Justice and Human Rights Minister, Yasona Laoly, put forward a plan to revise a regulation on corruption offenders. The minister posed a plan for reducing sentences (remission) in Article 34, 34A, 34B, and 34C on Government Regulation No. 99 Year 2012 on Terms and Conditions on Prisoners Rights, especially on corruption, terrorism, and drug offenders. According to the regulation, an inmate who already spent 6 months behind bars, is willing to pay his fine and become a justice collaborator and receiving recommendations from ‘related institutions’, could have his or her sentence reduced. The regulation is considered as a discriminative one and contradicts the Law on Penitentiary, No. 12 Year 1995, which the regulations should be based upon. On the other hand, the minister’s statement himself is contradicting his own refusal to grant remission to corruption inmates on 23 December 2014.

According to Supreme Court Decision No. 51/P/HUM2013, it already gives a base on the Government Regulation enactment. In their decision, the Supreme Court explains that there is no contradiction between Government Regulation No. 99 Year 2012 and the Law on Penitentiary No. 12 Year 1995 in terms of sentence reduction since the nature of the regulation itself is to develop the inmate capacity. Consecutively, a differentiation between capacity building programs becomes natural due to the degree of offences done by each inmate. Corruption offences considered has the ability to disrupt the possibility of the public to have their access to economic, social and cultural rights as mentioned in Article 22 of the Declaration of Human Rights. The Supreme Court Decision mentioned above is also in line with the Standard Minimum Rules for the Treatment of Prisoners in 1955, which is already universally applied. Article 70 from the Standard stated that special treatment to inmates should be applied accordingly and adjusting to the level of offences done by each inmate.

Andi Wijajanto, the Cabinet Secretary, mentioned that the Minister of Justice and Human Rights already proposed his plan to the President to revise the sentence reducing part from the government regulation. The President later on urged the Minister to “finish his elaboration and calculate the public sense of justice’ before imposing the new regulation. For such a response coming from the President, one should consider it as an ill one, since it displays the lack of stance Joko Widodo’s administration has for combating corruption. (ED)