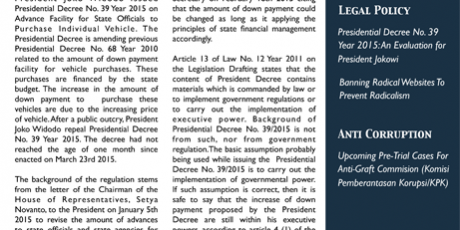 Presidential Decree No. 39 Year 2015: An Evaluation for President Jokowi

The background of the regulation stems from the letter of the Chairman of the House of Representatives, Setya Novanto, to the President on January 5th 2015 to revise the amount of advances to state officials and state agencies for the purchase of individual vehicles. Article 4 of Presidential Decree No. 42 Year 2002 on Guidelines for State Budget mentioned that the Minister of Finance as State Treasurer regulate the supply of money and the distribution of funds to finance the state budget in accordance with the government policy while implementing the Law on State Budget. Cabinet Secretary, Andi Widjajanto, later on submitted a request to Bambang Brodjonegoro the Finance Minister to consider the proposal on January 28th 2015. On that particular process, it is questionable if Cabinet Secretary sent a letter to the Finance Minister without the President consent, unless the Cabinet Secretary exceeded his authority. The finance minister wrote to the Cabinet Secretary on February 18th 2015 citing that the amount of down payment could be changed as long as it applying the principles of state financial management accordingly.

Article 13 of Law No. 12 Year 2011 on the Legislation Drafting states that the content of President Decree contains materials which is commanded by law or to implement government regulations or to carry out the implementation of executive power. Background of Presidential Decree No. 39/2015 is not from such, nor from government regulation.The basic assumption probably being used while issuing the Presidential Decree No. 39/2015 is to carry out the implementation of governmental power. If such assumption is correct, then it is safe to say that the increase of down payment proposed by the President Decree are still within his executive powers, according to article 4 (1) of the Indonesian Constitution.

According to Law No 12 Year 2011 and its implementing regulation, the Presidential Decree No. 87 Year 2014 regulate that there is a process of harmonization in the President Decree draft making. After the draft is being shown to the President and if there should be revision; the President just give orders to give one. Because once it is signed and enacted, the President is the one who carries all responsibility. In the future, the President should be more careful because not only his credibility that is staked due to his negligence, but also the fate of the people who depend on it. (ED)

Recent turmoil in Syria, Libya and Iraq are making way to extreme radicalism as horrifyingly displayed by the Islamic State or ISIS. Their propaganda to recruit new supporters through the Internet and social media are gaining popularity; also in Indonesia. The Ministry of Information and Technology took an extreme measures to prevent such radicalism to reach the main population by blocking twenty-two (22) websites considered spreading radical Islamic values; responding to the suggestion made by the National Counter Terrorism Agency (Badan Nasional Penanggulangan Terorisme).

But apparently such policy was considered ill taken by the public since it lacks sufficient legal basis and argumentation. According to Ministry of Information and Technology, based on BNPT request on their letter, the agency requested that the 22 websites unable to accessed and have their permit revoked. In their press conference, the BNPT stated that there are criteria to indicate radicalism but the agency fail to point which part from the 22 websites contain such materials. Otherissues are there are no room for clarification or appeal from the websites owner to BNPT (or the Ministry of Information and Technology) to address the banning itself. The BNPT are trying to make their case that it is too complicated find website owners and contributors. The way the Ministry of Information and Technology revoking people access to these websites should be considered against the citizen’s constitutional rights according article 28 C on the people’s right to access through technology and access to information according to article 28F. It should be noted that in article 28 J (2) of Indonesian constitution that to limit constitutional rights could only be done by law, not by regulations beneath the law.

In the future, if the Government considered any websites are endorsing any kind of radicalism, the best way to address it is by prosecuting those websites using articles from the Criminal Code. By using the court and not just conveniently closing access; everybody, including the Government has an equal opportunity to make their case and to be taken full responsible of their action if the court decides their material is spreading dangerous radicalism. (RW)

Judge Sarpin’s decision which stated that to name someone as suspect is part of pre-trial object is originated from the terms of ‘early evidence’ according to the Criminal Code Procedures (Kitab Undang-Undang Hukum Acara Pidana/KUHAP) and Law No. 30/2002 on the KPK. The term is actually, quite contradict with other part from the Code.

According to the Criminal Code article 1 number 14, a suspect is someone based on his action or his situation according to early evidence ought to be a suspect in a felony. And according to Law 30/2002 on the KPK, “early evidence” is considered suffice if there is a minimum two evidences found. On the other hand, the Criminal Code also stipulates that judge should not nullifying evidence during pre-trial process; but rather during court procedural instead.

Such contradictory creates differences while interpreting the Code amongst judges on deciding what pre-trial object is. A decision taken by Judge Tatik in South Jakarta Court when she reject a pre-trial filed by Suryadharma Ali is the perfect example of such contradiction.

Due to future pre-trial plea from many KPK suspects, the anti-graft commission anticipates by adding more staff from the Attorney General Office. It is important for KPK to evaluate their policies on naming a person suspect. It should be taken into considerable amount of scrutiny while the KPK should maintain their efficiency preparing their documents before going to court. Adding more staff to tackle future pre-trial notion should be accompanied by better strategy to anticipate future decision similar like Judge Sarpin’s. (RW)