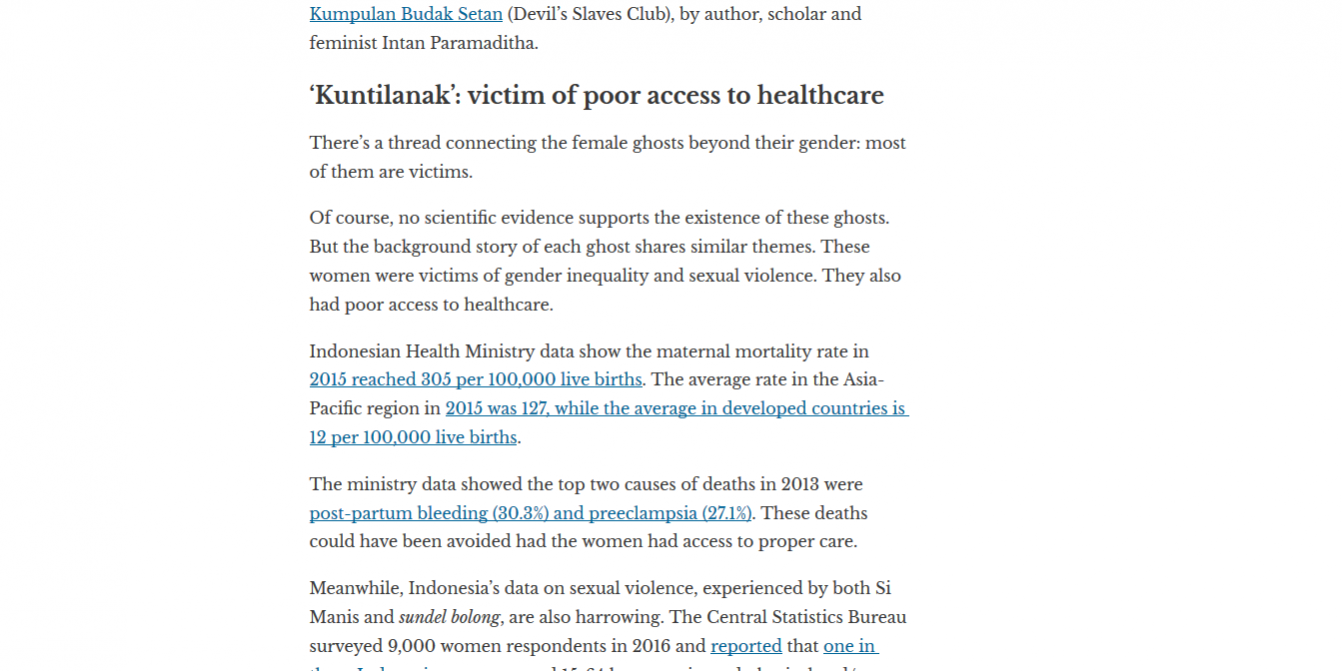 Indonesian moviegoers have had something to talk about these past two weeks. A top box-office movie by director Joko Anwar, Satan’s Slave, has a hair-raising ghost, called “Ibu” or “Mother”, haunting almost 2 million viewers. The millions were scared of “Ibu”, but I have scary data haunting Indonesian women and these ghosts are real.

In the annals of Indonesian folklore, female ghosts take centre stage. The country has kuntilanak, sundel bolong and Si Manis Jembatan Ancol. Most female ghosts in Indonesia were loving mothers or ordinary women before they started haunting the world with dark agendas.

Among the most popular ghosts are kuntilanak and sundel bolong; their narratives are reproduced in pop culture products, most notably movies.

Kuntilanak is said to have a penchant for haunting women during delivery and stealing newborns, while sundel bolong terrorises men walking alone in the dark of night.

The third one is Si Manis Jembatan Ancol, loosely translated into The Pretty One Haunting Ancol Bridge, referring to Ancol, an area in North Jakarta. Men were said to have raped and killed Si Manis in North Jakartawhen she escaped her husband.

A different kind of female ghost, an outlier, is Nyai Roro Kidul, believed to be the ruler of the southern sea of Java, who becomes the mystical wife of each Mataram king.

There’s a thread connecting the female ghosts beyond their gender: most of them are victims.

Of course, no scientific evidence supports the existence of these ghosts. But the background story of each ghost shares similar themes. These women were victims of gender inequality and sexual violence. They also had poor access to healthcare.

The ministry data showed the top two causes of deaths in 2013 were post-partum bleeding (30.3%) and preeclampsia (27.1%). These deaths could have been avoided had the women had access to proper care.

Meanwhile, Indonesia’s data on sexual violence, experienced by both Si Manis and sundel bolong, are also harrowing. The Central Statistics Bureau surveyed 9,000 women respondents in 2016 and reported that one in three Indonesian women aged 15-64 has experienced physical and/or sexual violence in their lifetime.

In another report, the bureau recorded 1,739 reported rape cases in 2015, higher than robbery using sharp weapons or firearms, which reached 1,097 in the same year.

But “Ibu”, the woman in the movie set in 1981, would probably have a better fate today compared with her fate then. She was lying helpless for three years without a proper diagnosis. In 2017, at least, she would probably have received a better diagnosis thanks to Indonesia’s universal healthcare, BPJS Kesehatan, implemented since 2014.

Don’t let there be another ‘sundel bolong’

Of course juxtaposing the stories of Indonesian female ghosts with real data is only a way for me to highlight an important issue using folklore and a popular culture product.

But the popular ghosts’ stories reveal the close connections between violence against women and access to healthcare for women in the distant past. As the maternal death rate shows, the state of healthcare for Indonesian women today remains grim.

Perhaps, we would not have the story of kuntilanak haunting young mothers and their newborns had more real live Indonesian women survived child labour and deliver healthy babies.

Si Manis‘s violent rape and murder story is said to have originated from a true story in Dutch colonial time. Today, the streets of 21st-century Jakarta are not yet safe for women.

Sundel bolong’s unwanted pregnancy, a result of rape, could have been avoided if she received adequate reproductive healthcare. Indonesia has issued a regulation legalising abortion for rape victims, but its implementation remains elusive.

Harsh punishment for rapists would have also spared sundel bolong from having to haunt those villains on her own. An online survey by women NGOs last year revealed 93% of rapes were not reported. Data from a 2013 masculinity survey by women’s crisis centre Rifka Annisa showed only 21.5% of respondents who admitted to committing sexual violence suffered legal consequences.

The plights of these women ghosts, as told by the older generations, serve as a warning about the state of Indonesian women today. The numbers and data should be scary stories for Indonesian women.

If we don’t improve reproductive health services for women and let impunity reign among sexual violence perpetrators, we will continue the legacy of the female ghosts to our next generation. Not only in movies, but in real life as well.