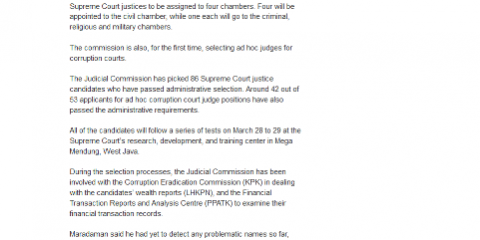 The Judicial Commission has promised to carry out a transparent selection of Supreme Court justices amid concerns that several candidates with poor track records have made it on to the list.

The commission has asked for the public to monitor and immediately submit complaints about the candidates through its official website and call center.

“We don’t know too much about the candidates, so please help us in the selection process by immediately submitting complaints if any. I can guarantee that the our recruitment committee’s investigation team will process all complaints and reports. The public need not worry,” commissioner Maradaman Harahap said on Sunday.

The Judicial Commission is currently in the process of selecting eight Supreme Court justices to be assigned to four chambers. Four will be appointed to the civil chamber, while one each will go to the criminal, religious and military chambers.

The commission is also, for the first time, selecting ad hoc judges for corruption courts.

The Judicial Commission has picked 86 Supreme Court justice candidates who have passed administrative selection. Around 42 out of 53 applicants for ad hoc corruption court judge positions have also passed the administrative requirements.

All of the candidates will follow a series of tests on March 28 to 29 at the Supreme Court’s research, development, and training center in Mega Mendung, West Java.

During the selection processes, the Judicial Commission has been involved with the Corruption Eradication Commission (KPK) in dealing with the candidates’ wealth reports (LHKPN), and the Financial Transaction Reports and Analysis Centre (PPATK) to examine their financial transaction records.

Maradaman said he had yet to detect any problematic names so far, because the candidates’ dossiers were still being checked out by the KPK and PPATK.

Legal activists from the Judicial Watch Coalition said that of the current 86 Supreme Court justice candidates a number should be dropped because of their poor records.

According to the coalition’s preliminary checks, several candidates are not competent to sit in specific chambers.

“For example, they are competent in and usually handle criminal cases, but have applied for the civil court. They shouldn’t do it, because if they are selected, it will impact on their performance in handling cases. The worst thing is they could make the court less productive,” said Miko Susanto Ginting from the Center of Legal and Policies Studies (PSHK), a member of the coalition.

He also criticized the commission for being too procedural, as it simply fulfilled requests for justices from the Supreme Court.

“In deciding how many judges to hire, the court and the commission should compare the number of cases in every court. Just because there are eight judges who will retire, it doesn’t mean the court really needs eight. It could be fewer or more,” Miko said.

In response, Maradaman of the commission admitted that there were many applicants applying for positions they were not suitable for.

“It’s their risk. Just let them follow the selection. We are still in the administrative process and they will face many more tests, including a quality test, which will examine their competence,” he said, adding that there were also several candidates who applied for justice positions in both the Supreme Court and corruption courts.

He said that the commission followed the request by the Supreme Court because that institution knew how many judges were needed.

Judicial Commission commissioner Farid Wajdi said that if the number of candidates who could pass the entire selection procedure was fewer than eight, the commission would not force the matter.

“We are committed to passing only qualified candidates of integrity,” Farid said. – See more at: http://www.thejakartapost.com/news/2016/03/28/judicial-commission-promises-transparent-selection.html#sthash.Cv9cu8yu.dpuf