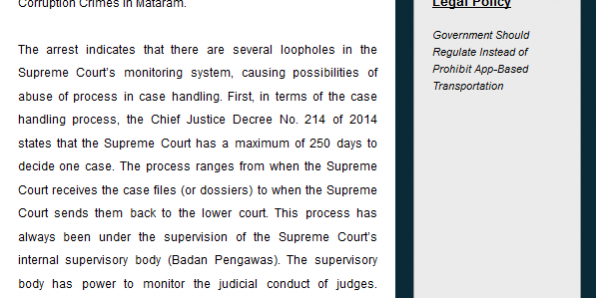 The Corruption Eradication Commission (Komisi Pemberantasan Korupsi/KPK) arrested a mid-level official of the Indonesian Supreme Court, Andri Tristanto Sutisna, for allegedly being involved in a four-hundred million Rupiah bribe during an operation in Jakarta last month. The bribe was allegedly related to the delay of a corruption case verdict delivery to the Court for Corruption Crimes in Mataram.

The second loophole is relating to the application of the court’s case tracking system, which was developed to store the cases’ details and monitor the case handling process. This system has been applied only on the district and appellate courts level while it has not been applied in the Supreme Court.

Government Should Regulate Instead of Prohibit App-Based Transportation

App-based transportation has once again become a spotlight issue. This was triggered by the protests of taxi drivers demanding the closure of Uber and GrabCar in Indonesia as well as the issuance of the Minister of Transportation Circular No. AJ 206/1/1 PHB 2016 dated 14 March 2016 addressed to the Minister of Communications and Information concerning the “request to block applications used for ordering transportation services (Uber Taxi and Grab Car)”. The letter re-ignited controversy over this kind of transportation; before, there had been a similar letter posted to the National Police in November 2015.

The Minister of Communication and Informatics diplomatically responded to unblock the apps. This is due to public needs towards such applications since the public transportation system has not been well provided. Despite public appreciation towards the minister’s prompt response, many taxi drivers and taxi companies are disappointed in the new policy due to their decreasing incomes after Uber and GrabCar entered the door-to-door transportation market.