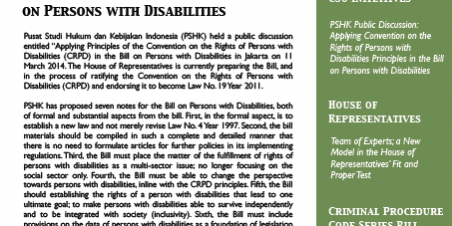 The public discussion also invites all participants and the Indonesian society to encourage the creating of policies supporting efforts of the implementation, respect, and fulfillment of the rights of persons with disabilities, in accordance with the principles within the CRPD. (FN)

Team of Experts; a New Model in the House of Representatives’ Fit and Proper Test

The Constitutional Court at the moment is looking for justices in order to replace Akil Mochtar and Hardjono at the end of April. According to Law No. 4 Year 2014 on the Provision of Government Regulation in Lieu of Law 1 Year 2013 on the Second Amendment towards Law No. 24 Year 2003 on the Constitutional Court, the Judicial Commission is the institution appointed in establishing a Team of Experts who will select constitutional court judge candidates. However, on Thursday 13 February 2014, the Constitutional Court annulled the law due to its contradiction with the constitution, resulting in the judges’ selection process to still be done by the House of Representatives.

On Wednesday 5 March 2014, after the Team of Experts provided four qualified names to the House of Representatives through the voting mechanism, the House then select Wahidudin Adams (former Director General of Legislation of the Ministry of Law and Human Rights) and Aswanto (academician from Universitas Hasanuddin, Makassar) as the replacement constitutional judges.

After describing the initial overview on the discourse of the Criminal Procedure Code amendments last edition, this week’s digest will portray the regulations towards the advancements of rights on persons with disabilities in the Criminal Procedure Code Bill. The bill is considered as an urgency, since it is one of the many dimensions of the government’s declaration of commitment and responsibility towards the rights, especially when faced against the law (in this case, the criminal justice process). In any case, persons with disabilities in the criminal justice process can be positioned, as anyone can, as perpetrators (the suspect/accused), witnesses (including victim witnesses), and the victims themselves.

The Criminal Procedure Code amendment is an entry point for improving the flaws in regulating the rights on persons with disabilities when faced with the criminal justice process. Firm regulations towards the responsibilities of the government and law enforcement officials are much needed, not to mention the compliance towards principles arranged in the United Nations Convention on the Rights of Persons with Disabilities already ratified through Law No. 19 Year 2011. Several principles, such as the acknowledgement of an aide, expansion of categories, and increasing the degree of needs towards persons with disabilities are a minimum standard, which are only seen fitting to be accommodated in the amendments. In addition, in accordance with Article 13 of the Convention, in the Government Regulation regarding the implementation guidelines of the Criminal Procedure Code, there is a need to establish appropriate trainings for law enforcement officials.  (MSG)