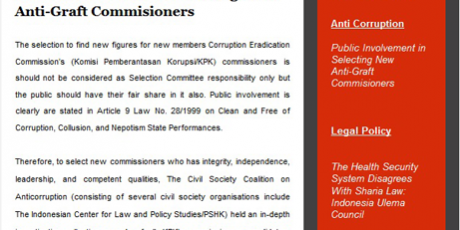 The selection to find new figures for new members Corruption Eradication Commission’s (Komisi Pemberantasan Korupsi/KPK) commissioners is should not be considered as Selection Committee responsibility only but the public should have their fair share in it also. Public involvement is clearly are stated in Article 9 Law No. 28/1999 on Clean and Free of Corruption, Collusion, and Nepotism State Performances.

Therefore, to select new commissioners who has integrity, independence, leadership, and competent qualities, The Civil Society Coalition on Anticorruption (consisting of several civil society organisations include The Indonesian Center for Law and Policy Studies/PSHK) held an in-depth investigation collecting records of all  KPK’s commissioners candidates.  Furthermore, The Civil Society Coalition on Anticorruption also opens a complaint post to facilitate public inputs in 17 provinces in Indonesia.

Stages  to provide input on  48 candidates for  KPK’s commissioners who qualified in administration aspect was closed on August 3rd. However, the Selection Committee already stated they still receive inputs from the public until the whole of selection process are finalized. The public should seize the opportunity to give their inputs,therefore,  the selection committee could receive maximum information for each of their candidates. The maximum the information is, it would be easier for the selection committee to choose whose the best candidates for KPK. (MSG)

In the end of July, the Indonesian Ulama Council (Majelis Ulama Indonesia-MUI) issued a fatwa stating that Health Security System (BPJS) is did not comply with sharia law. Some media called that BPJS is haram or forbidden. According to the Ulema Council, the  BPJS contains gharar (vagueness) contract, which triggers maisir (gambling) and riba (usury).  The fatwa stirs debate in public, especially for Indonesian Muslims.

The ulema council later on r clarified that they never issued a haram or to forbid the BPJS system as reported by media. The fatwa issued in relation with a petition submitted to the council to examine the BPJS system. Furthermore, MUI expects that BPJS to allocate funds and manage it with sharia laws accordingly; to cater the needs of Muslims. Such expectation resonates earlier dynamics upon the issue of conventional banking versus sharia during past decades.

For a short while, it is still unnecessary to revise  the Law No. 40/2004 on Social Security System and the Law No. 24/2011 on BPJS. The new implementing regulation issued by the government or BPJS could be the solution. However, in the longer term, to revise both the Social Security System and the BPJS law should consider necessary due to the complexity of the matter that will occur. It was based on our experience in the Islamic banking and insurance which led to the Islamic Banking Law in 2006 and the new Insurance Law in 2014. Therefore, every stakeholder especially government and BPJS shall start to think probable implications that may be existed in the future as consequences arising from the fatwa issued. (MFA & RW)

Supreme Court and The Judiciary

The fate of Mary Jane Veloso, who was sentenced to death in drug case, is re-discussed after the execution was postponed. The execution was postponed because there was a legal process in the Philippines related Veloso status as trafficked victim. Philippine officials came to Indonesia last week to apply for mutual legal assistance stipulated in the ASEAN Mutual Legal Assistance Treaty. The treaty signed by the 10 ASEAN members, of which the Philippines and Indonesia are members, allows states to cooperate on combating trans-national crimes. Filed requests for legal assistance from Philippines are Veloso’s testimony and files for the sake of proving on Maria Kristina Sergio, Veloso’s alleged trafficker.

Law No. 15 Year 2008 on the Ratification of the Agreement on Mutual Legal Assistance in Crimes provides that any foreign country may submit requests for assistance to the Indonesian government, either directly or through diplomatic channels. Minister of Law and Human Rights has the authority to approve or reject the provision of assistance. Outside of the many rights that have been violated in the proceedings of Veloso, Minister duly cooperate to provide the legal assistance needed by Philippines.

If the Philippines court decides Sergio guilty of human trafficking, Veloso could use the result as new evidence to be considered in a case review or appeal for clemency. Previous LRWD (LRWD 11/2015), has discussed the legal barriers to free Mary Jane of executions, either through case review or appeal for clemency because of finality and certainty. But once more, the finality and certainty argument should not prevail the right of justice. (GAT & ED)