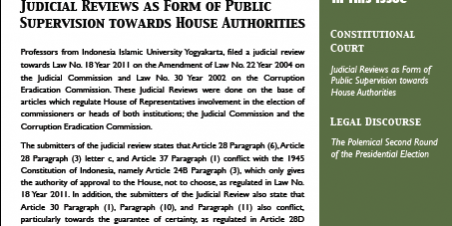 The Polemical Second Round of the Presidential Election

The journey to Istana Merdeka becomes more and more interesting with each passing day. The frenzy between supporters regarding weaknesses and strengths of each presidential candidate through the media can’t seem to be paused. One issue raised is regarding the second round of the presidential election. There’s been a misinterpretation of Article 6A Paragraph 3 of the 1945 Constitution, which requires the candidates for President and Vice President who will be sworn to be ones who have at least 50% of the votes and at least 20% of votes in over half of the provinces in Indonesia. The question is; what if the 20% of votes from each province from over half the number of provinces in Indonesia is not met? Will there be a second round of voting even though the number of candidates stays the same?

Saldi Isra, constitutional law professor from University of  Andalas, stated that since there are only two pairs of candidates, then the 20% requirement becomes irrelevant. In his opinion, the mandate of constitution makers regarding that requirement is only applied if there are more than two pairs of candidates. In order to validate that opinion, we need to refer to an authoritative document, namely the Comprehensive Paper of the 1999-2002 Constitution Amendments. Within it, there is a clear reflection of the line of debates between the constitution makers regarding how to restore the people’s sovereignty through direct elections. Therefore, the point is not in the number of candidates. The 50% requirement is to fulfill the national popular vote, while the 20% requirement in each province in over half of the number of provinces in Indonesia is an electoral vote, designed to open up electoral chances for candidates from outside of Java. It should be noted that at the time of the 1945 Constitution Amendments during 1999 to 2002 period of time; 60% of the voters were located in Java. With that particular fact, however candidates there might be, as long as the requirement mandated by the constitution isn’t fulfilled, re-elections must continue to take place.

Judicial Reviews as Form of Public Supervision towards House Authorities

Professors from Indonesia Islamic University Yogyakarta, filed a judicial review towards Law No. 18 Year 2011 on the Amendment of Law No. 22 Year 2004 on the Judicial Commission and Law No. 30 Year 2002 on the Corruption Eradication Commission. These Judicial Reviews were done on the base of articles which regulate House of Representatives involvement in the election of commissioners or heads of both institutions; the Judicial Commission and the Corruption Eradication Commission.

Judicial Reviews are a form of public supervision done by the people It is imperative to be done in order to guarantee that there is no abuse of power done, especially while carrying out legislative authorities or forming legislations. If the Constitutional Court grants the proposal, the House must accommodate, either by revising the Laws that are relevant or by revising the Internal Standing Orders of the House of Representatives. (FN)