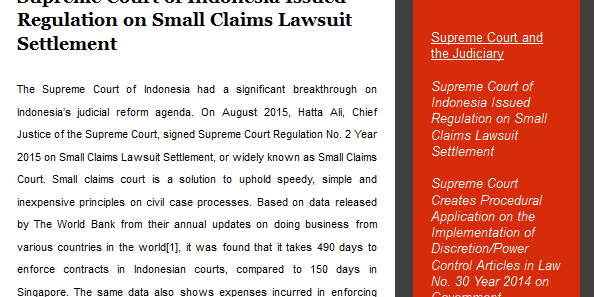 The Supreme Court of Indonesia had a significant breakthrough on Indonesia’s judicial reform agenda. On August 2015, Hatta Ali, Chief Justice of the Supreme Court, signed Supreme Court Regulation No. 2 Year 2015 on Small Claims Lawsuit Settlement, or widely known as Small Claims Court. Small claims court is a solution to uphold speedy, simple and inexpensive principles on civil case processes. Based on data released by The World Bank from their annual updates on doing business from various countries in the world , it was found that it takes 490 days to enforce contracts in Indonesian courts, compared to 150 days in Singapore. The same data also shows expenses incurred in enforcing contracts; an enormous 90% of the costs are spent on the lawyer fee.

The Supreme Court regulation intends to lower the cost and the administrative process for disputes or lawsuits amounted at a maximum of Rp 200.000.00 (around USD 14,000). By the new regulation, the court will have the authority to limit the maximum time for trial to 25 days since first hearing. Also, the trial stage will shorten the phases into 3 stages and add a dismissal process to filter the case. Other measures taken are the use of a single judge instead of a panel and to limit cases from parties involved in the lawsuits. Any case that doesn’t pass the filter will proceed in using the conventional civil procedure mechanism.

The consideration behind the establishment of the small claims court is not only to facilitate business but also to expand access to justice for the people. The civil procedure is proven to be costly and lengthy which can only be achieved only by a limited amount of people. People who have limited time or money will think twice to settle their civil disputes in court. (MS)

Supreme Court Creates Procedural Application on the Implementation of Discretion/Power Control Articles in Law No. 30 Year 2014 on Government Administration

The first objective relates to corruption eradication movement. There are talks in certain circles that the anti-corruption campaign has created fears among public officials exercising their discretion power, especially in budget spending. In some cases, the law enforcement agencies, i.e., Attorney General Office (AGO) and the police, have arbitrarily charged public officials on corruption despite the nature of the case being maladministration or policy issues. The Law on Government Administration gives protection to public officials in case of a prosecution of a discretion abuse needs to be confirmed by a decision from the administrative court prior to any further actions, including criminal charges. However, such legal arrangements are in indirect conflict with the anti-corruption law, including potential ambiguity between the jurisdictions of the criminal court vis a vis to the administrative court.

The Supreme Court realizes the potential conflict. To resolve the situation, the Supreme Court enacted Supreme Court Regulation No. 4 Year 2015 on Procedural Guidance on Evaluate Abuse of Discretion/Power. The Supreme Court tries to create procedural leeway by declaring that the object of the Administrative Court in the Law is on the matter that the abuse of discretion/power comes from internal auditor, not the law enforcement agencies, i.e., KPK, Police or AGO. However, the leeway still cannot settle the potential conflict between the Criminal Court and Administrative Court Jurisdiction. For instance, in the case of state loss, it is often that law enforcement agencies use internal auditors to evaluate state loss. Thus, the question would be whether the evaluation made by the internal auditor is still on the jurisdiction of Administrative court. Additionally, the Supreme Court regulation also potentially blocks the right of citizens to challenge discretion by state apparatus due to the limitation since the forum can only be used by state officials. (GAT)

Deregulation for Business and Economy

The 1998 economic crisis was valuable lesson for the government. It is believed that one of the causes of crisis was routine deregulation done by the New Order regime. Firstly done in 1983, deregulation initially gave enlightenment for Indonesia’s economy. However, deregulation regularly touched only the sectors of export, tax, and telecommunications. The deregulation did not touch the distortion on the high-cost economy problem for investors.

In regards of current deregulation, investors and markets are still skeptic about the initiative. Furthermore, the government should reflect on previous initiatives during the deregulation on banking policy in the ‘80s to answer the skepticism. (MFA)