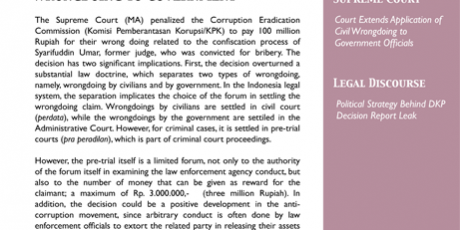 The Supreme Court (MA) penalized the Corruption Eradication Commission (Komisi Pemberantasan Korupsi/KPK) to pay 100 million Rupiah for their wrong doing related to the confiscation process of Syarifuddin Umar, former judge, who was convicted for bribery. The decision has two significant implications. First, the decision overturned a substantial law doctrine, which separates two types of wrongdoing, namely, wrongdoing by civilians and by government. In the Indonesia legal system, the separation implicates the choice of the forum in settling the wrongdoing claim. Wrongdoings by civilians are settled in civil court (perdata), while the wrongdoings by the government are settiled in the Administrative Court. However, for criminal cases, it is settled in pre-trial courts (pra peradilan), which is part of criminal court proceedings.

However, the pre-trial itself is a limited forum, not only to the authority of the forum itself in examining the law enforcement agency conduct, but also to the number of money that can be given as reward for the claimant; a maximum of Rp. 3.000.000,-  (three million Rupiah). In addition, the decision could be a positive development in the anti-corruption movement, since arbitrary conduct is often done by law enforcement officials to extort the related party in releasing their assets that are not necessary related to crime. Nonetheless, a possible lawsuit floodgate should be anticipated because of the decision. One way to anticipate is by updating the regulation related to wrongdoings by law enforcement officials in carrying out their authority in criminal proceedings. (GAT)

The Merah Putih Coalition Advocacy Team (Tim Advokat Koalisi Merah Putih) from Presidential and Vice Presidential candidate Prabowo Subianto and Hatta Rajasa have reported the so-called leaking of the Honorary Council of Officers (Dewan Kehormatan Perwira/DKP) decision on Prabowo Subianto’s involvement in the 1998 kidnapping case. It was sent to the Indonesian National Police Headquarters on Friday (13/6). On their 610/VI/2014 report, they reported four social media activists as the party who initially leak the document. The DKP decision, with Indonesian Army Forces Headquarters letterhead and numbered KEP/03/VIII/1998/DKP has become political commodity since it contains the dismissal of Prabowo Subianto from the Indonesian National Army (formerly the Indonesian Armed Forcers/Angkatan Bersenjata Republik Indonesia/ABRI) regarding the abduction and illegal confinement of activists in 1998. Amidst the political heat leading up to the presidential elections, the advocacy team regards the leak. However, the Chairman of the Prabowo-Hatta Success Team, Mahfud MD, confessed as the one who leaked the document, apologized, and instead has requested for it to be distributed even further since politically it is profitable for the victory of his candidates.

Prabowo’s dismissal from the Indonesian National Army is an irrefutable fact, acknowledged by Prabowo himself. Therefore, it cannot be qualified as an act of black campaigning. The debate on whether or not the DKP decision is a classified document is also not a difficult question to answer. According to Article 19 of Law No. 14 Year 2008 on the Openness of Public Information, it clearly states that the confidentiality towards information is determined by the public agency that produced, mastered, or stored the information. To this day, the Indonesian National Army as said party has not yet tested the consequences and confidentiality of the DKP’s decision, therefore not qualifying it as a classified document.

The reporting party also deserves to receive attention. If there is any party who should express their consent upon this matter it should be the Indonesian National Army, who are supposed to act as the complainant. However, they show no signs of stepping towards that direction. Therefore, from legal standing perspective, the Prabowo-Hatta team has no reason to file a complaint to the Police. In addition, the article submitted by the team also seems doubtful, namely Article 28 Paragraph (2) of Law No. 11 Year 2008 on Electronic Information and Transactions, that contains the prohibition of the spreading of hatred towards ethnicity, race, and religion. The Prabowo Hatta camp also submitted; Article 322 of the Criminal Code regarding the leaking of information. The motive of this report should be questioned since Prabowo’s advocacy team did not supply Law No. 14 Year 2008 on the Openness of Public Information. The most important question to answer is whether or not  the report submission is just a political strategy for halting attacks from the opposing party, therefore concealing the real issue at hand; not yet finding the kidnapped victims of 1998. (MSG)