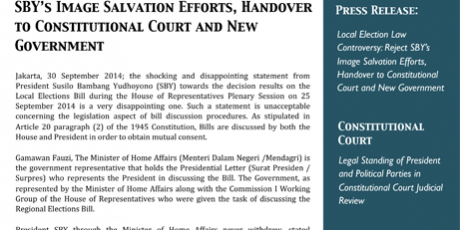 Jakarta, 30 September 2014; the shocking and disappointing statement from President Susilo Bambang Yudhoyono (SBY) towards the decision results on the Local Elections Bill during the House of Representatives Plenary Session on 25 September 2014 is a very disappointing one. Such a statement is unacceptable concerning the legislation aspect of bill discussion procedures. As stipulated in Article 20 paragraph (2) of the 1945 Constitution, Bills are discussed by both the House and President in order to obtain mutual consent.

Gamawan Fauzi, The Minister of Home Affairs (Menteri Dalam Negeri/Mendagri) is the government representative that holds the Presidential Letter (Surat Presiden/Surpres) who represents the President in discussing the Bill. The Government, as represented by the Minister of Home Affairs along with the Commission I Working Group of the House of Representatives who were given the task of discussing the Regional Elections Bill.

President SBY through the Minister of Home Affairs never withdrew, stated disapproval, or objected the idea of the indirect local elections. The Minister also represented the President when proposing two versions of the Bill, each includes a mechanism for both indirect and direct local elections to be further discussed during House of Representatives Level II Discussions.

It can be seen that “Mutual Consent” as mentioned on Article 20 paragraph (2) of the 1945 Constitution had already happened and has been obtained since the Minister who represented the President agree to propose two options and enter the second stage of House’s Discussions.

If there is a genuine rejection from President SBY upon the regional election, it should have been delivered through the Minister of Home Affairs before entering the Level II Discussions. The President through the Minister could have delivered his rejection of the content withdrew, and refused to proceed to Level II Discussions.

In refusing the indirect local election regulation, the President should have used formal mechanisms and procedures, not by giving out opinions in the social media while the official representative still supports the two options at the House of Representatives.

Historically speaking, stating his disapproval on the bill’s content and withdrawing his position before entering Level II Discussions were recently done by President SBY during the discussions on the Public Housing Savings Bill on 23 September 2014. These steps then halted the discussions of the Bill.

In addition, President SBY’s desire to not authorize nor sign the Local Elections Bill is an act that has no legal impact towards the validity of the Law. Article 20 paragraph (5) of the 1945 Constitution determines that a Bill that has been mutually agreed upon but has not been signed by the President within 30 days of the agreement will still be considered as a legitimate law and is mandatory to be enacted.

In response to the above situation, Pusat Studi Hukum dan Kebijakan Indonesia/Indonesian Centre for Law and Policies Studies (PSHK) states that:

First; President SBY through the Minister of Home Affairs has given his approval towards the two options, and because of that, the “Mutual Consent” term as referred to in Article 20 paragraph (2) of the 1945 Constitution has been done and reached. It is not reasonable that recently President SBY has been seeking various ways to reject the Bill whose options were promoted by the representing Minister. The discourse that supported President SBY in publishing the Government Regulation in Lieu of Law (Peraturan Pemerintah Pengganti Undang-Undang/PERPPU) is not appropriate remembering that the “crisis in force” situation has not been met as stipulated in Article 22 paragraph (1) of the 1945 Constitution. It is also not appropriate for the President to state that there has been a crisis in force towards the condition that was proposed and approved by the President himself. Efforts that have been done by President SBY in regards to the Local Elections Law are merely in order to salvage his image at the end of his tenure, therefore it must be rejected.

Third; the new government under the leadership of President Elect Joko Widodo should immediately propose an Amendment Bill towards the Local Elections Law which includes a direct system on Local Elections and press for the House of Representatives to place the Bill as a Legislation Priority of 2015.

Bent by pressure from the public and to safeguard his image, President Susilo Bambang Yudhoyono and the political party coalition who supported Jokowi haveexpressed their intention in petitioning the validity of the law to the Constitutional Court. Such intention is baseless and perplexing. From the President’s side, the Local Elections Law is passed by his acknowledgment and control. The Ministry of Home Affairs is his aide in government, who was also present in the deliberation andenactment of the law. Additionally, his Democrat Party is the largest political power in Parliament. The enactment of the law can be considered as a failure by SBY to uphold his political aspiration amongst his aide and politicians in his party. Furthermore, by law, the Political Party does not have legal standing based on several Constitutional Court decisions, including the newest Constitutional Court decision on the Law on the People’s Consultative Assembly, House of Representatives, House of Regional Representatives, and Regional House of Representatives (Undang-Undang MPR, DPR, DPD, dan DPRD /UU MD3). The reason for the rejection is based on the rationale that the political party had their chance during the discussions in the law making process. Therefore, the rights of political parties to petition the law has abolished. Considering the argument, it is logical to apply the rationale to evaluate the President’s (read: the Government’s) position as one of the parties already involved in debating the law making process. (GAT)

The Ethical Side of SBY and Hamdan Zoelva’s Discussion

After arriving at Kansai Airport, Osaka, President Susilo Bambang Yudhoyono reached out to Chairman of the Constitutional Court, Hamdan Zoelva. The President admitted that he asked for consideration in regards to how the Local Elections Bill could be enacted because it had not gotten mutual consent from the House of Representatives and Government. He later claimed that Hamdan Zoelva gave an explanation on the ratification of Laws and their relations to the constitution. According to the President, the step in contacting the Chairman of the Constitutional Court is a form of “consultation”.

In addition to that, one matter that needs to be underlined is that the ethical consideration towards behavior of judges cannot only be viewed formalistically from the code of ethics only.There are also moral principles and propriety that is mandatorily upheld and obeyed by judges and courts in maintaining their authority so that the principles of decent and fair trials as derivatives of a state of law can be realized. The obligation to uphold appropriateness of behavior has been seen all this time as only being attached to judges. However this is not the case; every individual, especially from different branches of power such as executive and legislative, also have the obligation to maintain judicial independence. Therefore, President Susilo Bambang Yudhoyono has done an inappropriate act and violated the code of ethics, plus meddled in the independence of the judiciary. The President has subordinates to whom he can consult to, such as the Minister of Justice and Human Rights. In addition, there is also the Presidential Advisory Council whose task is to provide advice to the President. Towards Hamdan Zoelva, an investigation should be held and an imposition of ethical sanctions, followed by the use of dissenting rights to withdraw from the investigation of the Local Elections Bill case. (MSG)