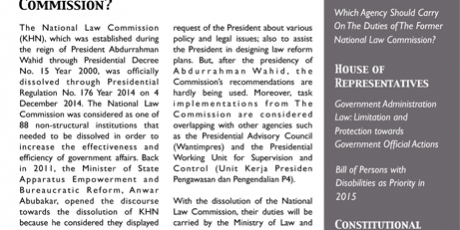 Which Agency Should Carry On The Duties of The Former National Law Commission?

The National Law Commission (KHN), which was established during the reign of President Abdurrahman Wahid through Presidential Decree No. 15 Year 2000, was officially dissolved through Presidential Regulation No. 176 Year 2014 on 4 December 2014. The National Law Commission was considered as one of 88 non-structural institutions that needed to be dissolved in order to increase the effectiveness and efficiency of government affairs. Back in 2011, the Minister of State Apparatus Empowerment and Bureaucratic Reform, Anwar Abubakar, opened the discourse towards the dissolution of KHN because he considered they displayed minimum performance. However, the discourse was rejected by Prof. J. E Sahetapy (KHN Chairman), who stated that since the commission was established, they already served their purposes by giving recommendations on significant legal reform issues such as the separation design of the military and police, the establishment of the Corruption Court, access to judicial transparency, and the President’s annual speech on law issues.

The Commission’s tasks as listed in Presidential Decree No. 15 Year 2000 is to provide an opinion on the request of the President about various policy and legal issues; also to assist the President in designing law reform plans. But, after the presidency of Abdurrahman Wahid, the Commission’s recommendations are hardly being used. Moreover, task implementations from The Commission are considered overlapping with other agencies such as the Presidential Advisory Council (Wantimpres) and the Presidential Working Unit for Supervision and Control (Unit Kerja Presiden Pengawasan dan Pengendalian P4).

With the dissolution of the National Law Commission, their duties will be carried by the Ministry of Law and Human Rights. Within one year, the administrative transfer from the commission to the Ministry of Justice and Human Rights will be coordinated by the Ministry State Apparatus Empowerment and Bureaucratic Reform. The Minister of Justice and Human Rights should accurately decide which agency or unit in the government will carry the commission legacy to give recommendations to the President on law issues. Efficiency and effectiveness that become the basis for the National Law Commission dissolution should not diminish the importance of their work. (ED)

One of the most important features of the law is the limitation on the use of discretional power of government officials. Beforehand, the discretionary power of government officials is loosely interpreted. In the law, discretionary power is clearly regulated and defined. Additionally, the law also provides certain mechanism to claim damage as result in the use of discretionary power. On the protection aspect, the law gives protection of government officials in making governmental decisions. The protection includes the decriminalization of administrative failure that result in state financial losses. The law also puts internal mechanism along with administrative court as institutions to determine the state losses and the element of abuse of power as opposed to criminal justice institution power in prosecuting the actions of government officials. This arrangement is in direct conflict with the Anti-Corruption Law, in the event that the law enforcement, i.e., the Corruption Eradication Commission (Komisi Pemberantasan Korupsi/KPK), consideras the maladministration to result in state losses as corruption cases need to be prosecuted. (GAT)

The Constitutional Court (Mahkamah Konstitusi/MK) has sent President Joko Widodo a letter of objection to the appointment of the constitutional judge candidate selection committee. Under the constitution, the President, the Supreme Court, and the House of Representatives each proposed three constitutional judges to fill a total of nine judges. The selection committee, formed by the Presidential Decree No. 51 Year 2014, was assigned to find a replacement for Chief Justice Hamdan Zoelva, who is ending his tenure soon. The Constitutional Court, through the Secretary-General of the Court, expressed its disapproval of two names in the selection committee; a constitutional law expert Refly Harun and advocate Dr. Todung Mulya Lubis. The Court pondered they potentially have conflict of interest with the judges candidate. The Court argued that Refly and Todung have often been involved in many cases in the MK, especially in representing judicial review applicants. Conflicts of interest, the Court predicted, would arise if, in the future, the elected judge handle cases involving Refly or Todung.

There are two issues that arose after the objection letter was sent to the president. The first issue is relating to the relationship between the MK and the president. Under the Constitution and Law No. 24 Year 2003 on the Constitutional Court, the MK only has five authorities: to review the constitutionality of the Law, to resolve dispute on election results, to adjudicate dispute between state institutions, to decide dissolution of political parties, and to decide a parliament’s recommendation on the impeachment. Thus, the MK is not mandated authority to convey opinions to the president, regardless of its form. Beside it is not its authority, delivering opinions to the president could decrease the dignity of the MK, if the president ignores the MK opinions or objections.

The second issue is regarding potential conflicts of interest, which is used by the MK to reject Refly and Todung in the committee membership. The MK reasoned that both Refly and Todung have often become litigants in the MK trial. However, this reason is questionable because every Indonesian citizen, regardless of his or her profession, has the right to lodge judicial review case to the MK, as provided in Article 51 paragraph (1) of the Law on the Constitutional Court. In accordance with this provision, all members of the selection committee, not only Refly and Todung, have the same potential conflicts of interest, as they might become litigants in the MK in the future.

As a judiciary body, the MK should be able to maintain its authority and dignity by using the Court decision as the only medium to deliver its official statements. Additionally, as an institution that upholds the values of independence and integrity, the MK must also respect the independence of the other branches of government and not interfere in other institutions’ authority. (RA)

Bill of Persons with Disabilities as Priority in 2015

The House of Representatives (Dewan Perwakilan Rakyat/DPR) officially closed their first plenary session on 5 December 2014. The DPR has not released its National Legislation Program (Program Legislasi Nasional/ Prolegnas) yet, because they are still focused on internal arrangements, as well as establishing the internal regulation and filling structural office position. However, the House already decided on four bills becoming priorities to be ratified in early 2015, such as the Bill on Persons with Disabilities (RUU tentang Penyandang Disabilitas), Bill on Transportation (RUU tentang Transportasi), Bill on Architects (RUU tentang Arsitek), and Bill on the Ratification of Government Regulation in Lieu of the Law on Head of Local Government Elections (RUU tentang Pengesahan Perpu tentang Pemilihan Gubernur, Bupati, dan Walikota). These four bills are considered the most complete and ready to discussed as soon as possible.

The Bill on Persons with Disabilities was originally pushed by the civil society to be ratified by the House. During the last plenary session of the House’s 2009-2014 period, the bill was already ratified as an initiative bill from the House but the process did not continue since their tenure was over. The main idea of the bill is a paradigm shift in recognizing a person’s with disabilities his or her rights; from charity-based to rights-based. The bill arranges that persons with disabilities are equal with the other citizens, especially on fulfillment of their rights. The Bill on Persons with Disabilities consists of more than 200 articles since the bill regulates multi-sector issues such as transportation, education, health, public service, etc.

If the bill is passed, it will become a big achievement for the House of Representatives on their starting period. At least, they will get high appreciation from the constituents from the disabled community. (FN)