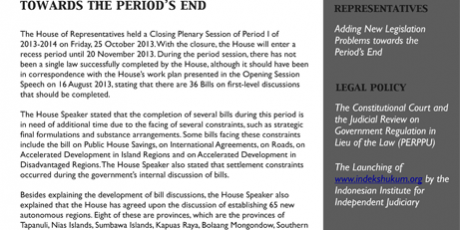 The House of Representatives held a Closing Plenary Session of Period I of 2013-2014 on Friday, 25 October 2013. With the closure, the House will enter a recess period until 20 November 2013. During the period session, there has not been a single law successfully completed by the House, although it should have been in correspondence with the House’s work plan presented in the Opening Session Speech on 16 August 2013, stating that there are 36 Bills on first-level discussions that should be completed.

The House Speaker stated that the completion of several bills during this period is in need of additional time due to the facing of several constraints, such as strategic final formulations and substance arrangements. Some bills facing these constraints include the bill on Public House Savings, on International Agreements, on Roads, on Accelerated Development in Island Regions and on Accelerated Development in Disadvantaged Regions. The House Speaker also stated that settlement constraints occurred during the government’s internal discussion of bills.

Besides explaining the development of bill discussions, the House Speaker also explained that the House has agreed upon the discussion of establishing 65 new autonomous regions. Eight of these are provinces, which are the provinces of Tapanuli, Nias Islands, Sumbawa Islands, Kapuas Raya, Bolaang Mongondow, Southern Papua, Central Papua and Southwest Papua. The bill that will manage the establishment of these 65 new autonomous regions will be discussed in the upcoming period which will start in mid-November. The formation of these new autonomous regions, also often referred to as regional expansion, has often been criticized for the lack of contribution towards the welfare of the local people, raising several new issues. The evaluation of the Ministry of Home affairs even states that 78% of regional expansion has failed; only 22% has been successful.

This year is a determining year for the House in completing the various laws that have been included in the National Legislation Program. There are several important bills such as the bill on Criminal Law, on Criminal Procedure, on Local Government, on Villages and on Local Elections. However, the issue of completing these laws will be faced against preparations for the 2014 General Elections. Members that have re-registered to be in the running will certainly be preoccupied by their political agenda. This condition gambles with the quality of our legislation. (MNS)

Legal Policy
The Launching of www.indekshukum.org by the Indonesian Institute for Independent Judiciary

Currently in Indonesia, the use of court rulings by society, be it academicians, practitioners and activists, has had the need for a court decision index and statistic. As of now, this need has been fulfilled by the launching of thewww.indekshukum.org website that processes the index of court rulings found in the Supreme Court rulings website (www.putusan.mahkamahagung.go.id), which is managed by the Indonesian Institute for Independent Judiciary (Lembaga Kajian dan Advokasi untuk Independensi Peradilan/LeIP).

The processed result of www.indekshukum.org provides a categorization of rulings, not only based on the types of cases but also by specific legal issues that exist in the considerations of the rulings. In addition, summaries of selected rulings are also provided, with the intention of facilitating users in obtaining an overview of rulings and also annotations or comments towards them.

The site also provides a criminalization statistic given by the court. There is also the facility of variable selection which allows users to decide for themselves what kind of statistical information they would like. In the long run, this criminalization statistic would be of use to Attorneys/Public Prosecutors and even Judges as a guide in determining the degree of criminal charges and sentences that will be given. (RMF)