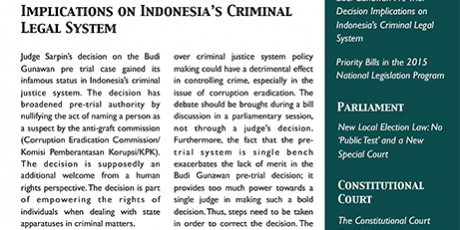 Judge Sarpin’s decision on the Budi Gunawan pre trial case gained its infamous status in Indonesia’s criminal justice system. The decision has broadened pre-trial authority by nullifying the act of naming a person as a suspect by the anti-graft commission (Corruption Eradication Commission/Komisi Pemberantasan Korupsi/KPK). The decision is supposedly an additional welcome from a human rights perspective. The decision is part of empowering the rights of individuals when dealing with state apparatuses in criminal matters.

But aside from an appreciative point of view from a human rights perspective, Judge Sarpin’s decision raises concerns about the court’s appropriateness in making such decisions. The lack of deliberation between the effectiveness of the state to control crime as opposed to human rights protection in debate over criminal justice system policy making could have a detrimental effect in controlling crime, especially in the issue of corruption eradication. The debate should be brought during a bill discussion in a parliamentary session, not through a judge’s decision. Furthermore, the fact that the pre-trial system is single bench exacerbates the lack of merit in the Budi Gunawan pre-trial decision; it provides too much power towards a single judge in making such a bold decision. Thus, steps need to be taken in order to correct the decision. The KPK should appeal using a special mechanism so that the Supreme Court can correct the pre trial decision. Additionally, it is also important for the parliament to start the debate on the Criminal Procedural Code Bill and make it as a priority in order to update the existing Criminal Procedural Code.  (GAT)

On 8 February 2015, the National Legislation Program (Program Legislasi Nasional/Prolegnas) was approved by the Parliament. There are 159 priority bills from the Parliament for the 2014—2019 period with 37 bills to be discussed this year alone. From 37 bills, there are 26 proposed by the Parliament, 10 from the government, and one from the House of Regional Representatives. Since the time of approval has already been pushed back to February, the consequence would be a setback due to the lack of time in discussing the bills. However, a note of appreciation should be given to the Parliament for setting a realistic target of 37 bills for the year 2015.

Included in the 2015 Prolegnas is the Criminal Code Bill (Rancangan Kitab Undang-Undang Hukum Pidana/RKUHP), revision of the Law on Information and Electronic Transactions, and the Truth and Reconciliation Commission (TRC) Bill. The Criminal Procedural Code Bill (Rancangan Kitab Undang-Undang Hukum Acara Pidana/RKUHAP) is not in the 2015 priority list but it is included in the 2014—2019 Prolegnas.

The inclusion of the Criminal Code Bill in the 2015 Prolegnas and the Criminal Procedural Code Bill in the 2014—2019 Prolegnas could be a positive indicator in the legal reform agenda. However, any commitment towards legal reform should be aligned with similar consistency towards the anti-corruption agenda. Hopefully there is a lesson that can be learnt from the previous Parliamentary period who only managed to pass 126 bills from a total of 247 prioritized bills in the 2009—2014 Prolegnas. (PB)

Earlier this week, the House of Representatives (Dewan Perwakilan Rakyat/DPR) finally passed an amendment on the Local Election Law that regulates a direct election system. Last September, the Parliament  passed a law governing indirect local elections, where the local parliament, also known as the Regional House of Representatives (Dewan Perwakilan Rakyat Daerah/DPRD), would elect regional heads. At the time, the-then President, Susilo Bambang Yudhoyono, who was going to end his tenure, issued an ‘interim law’ or a government regulation in lieu of law (Peraturan Pemerintah Pengganti Undang-Undang/Perppu) reapplying the direct election system. He argued that the direct election is in accordance with the people’s will. This interim law then subsequently received approval by the Parliament earlier this year. The House, therefrom, revised the interim law to change and add a number of provisions.

Therefore, Indonesia retains the direct election system at its local elections. This system has been applied since 2005, when the regional autonomy in Indonesia had already lasted one year. In addition to maintaining direct elections, the new Local Election Law also contains new crucial provisions. Through this legislation, the House and the government agreed that Indonesia would be conducting local elections simultaneously at the national level for the first time in 2027. Before reaching this level, three stages of simultaneous local elections will be conducted in multiple regions; in December 2015, February 2017, and June 2018.

Another provision that is also crucial is the dispute settlement of the election results. Since 2005, the Constitutional Court handled the disputed results of all kinds of elections—legislative, presidential, and local. The new Local Election Law stipulates that before the 2027 simultaneous local election, a special court that only handles election result disputes should be established. In the meantime, the Constitutional Court can continue to perform its duties until the special court has been formed.

Nonetheless, this new law has finally excluded the “public test” mechanism as an obligation to be performed by the regional head candidates in the nomination process—a process that would determine if the candidate is qualified to run for the election. This topic was contentious; the House, government, and civil society activists debated the pros and cons of this mechanism. Many commentators argued that if the “public test” was implemented in a transparent process, either by political parties or the electoral commission, it would be advantageous towards helping people identify the candidates’ track record. However, the government and the House have agreed that “public test” should be the responsibility of political parties should they nominate their candidates. Consequently, it does not need to be regulated specifically in this law. (RA)

On 12 February 2015, in their 77/PUU-XII/2014 decision, the Constitutional Court rejected the judicial review of Law No. 8 Year 2010 on Prevention and Eradication of Money Laundering. The judicial review was filed by former Chief of the Constitutional Court, Akil Mochtar, who got convicted of money laundering and receiving gratification from political parties in a local election dispute. Several issues are raised by the case, one of them being the use of the term “reasonably suspected” on the origins of wealth proceeded by crime. Akil argues that the phrase does not reflect proportional fairness and the certainty of law. The second issue is the absence of the obligation to prove the first predicated crime in money laundering cases. The third is regarding the authority of the anti-graft commision (Corruption Eradication Commission/Komisi Pemberantasan Korupsi/KPK) to investigate and to prosecute money-laundering cases.

To answer the first issue, the court argued that the use of the phrase “reasonably suspected” has been commonly used by the court and does not raise any questions of law enforcement related to citizen’s rights. It also depends on the existence of evidence and judge conviction in court. Therefore, the unfairness and the uncertainty sounded by Akil Mochtar in his appeal considered unreasonable by the Constitutional Court. Regarding the second issue, according to the Constitutional Court, it should be against common logic that someone benefiting from money laundering is unable to be punished by law if the predicated case has not been proven yet. The Constitutional Court stated that the KPK is on the same position as the Attorney General Office in terms of prosecuting corruption cases. To bring forth the essence of efficiency in justice system processes, the KPK is granted the authority to prosecute money laundering cases also. Regarding the KPK’s authority to prosecute money laundering cases, the judges also decided that it is not a matter of constitutionality that should be settled in the Constitutional Court. (MS)

On 18 February 2015, the Constitutional Court decided that Law No. 7 Year 2004 on Water Resources (Water Resources Law) is annulled. According to Decision No. 85/PUU-XI/2013, the Water Resources Law had allowed private entities control over water sources. The impact from such a policy is the imposition on public water being commercialized despite the notion that access to clean water is essential for humans.

The decision certainly has a broad impact. Control over water resources is now entirely left to the State/Regional Owned Enterprises (Badan Usaha Milik Negara/Badan Usaha Milik Daerah/BUMN/BUMD). The Constitutional Court decision is returning water regulations to Law No. 11 Year 1974 on Water as an umbrella act. Unfortunately, Law No. 11 Year 1974 on Water is irrelevant to the current situation, especially in regards to regional autonomy. The principle of fair business competition in water control perhaps is overlooked by the Constitutional Court with the annulment of the Water Law.

The main issues in the water resources policy is not solely regarding state control and anti-commercialization. It also is about the performance of water supply services for the public itself. Too much state control or monopoly could in effect impact performance inefficiency and bad service to the public. Another negative impact is that the concept of Public-Private Partnership (PPP) in infrastructure provision will be questioned since water supply is one of many sectors in PPP. Cooperation mechanisms in various PPP projects in several infrastructures are similar to each other. The annulment of the Water Law may give effect on water infrastructure provisions in the future.

The Water Law revision and consequently its implementation is actually a better option rather than annulling the law altogether. For the government, this situation will hamper their nawacita program, which focuses on improving the quality of Indonesian human life, citizen productivity and market competitiveness. However, it is the duty of the Government and the Parliament to re-draft a new Water Law that could able to accommodate all interests. (MFA)

President Jokowi has issued an “interim law’ or Government Regulation in Lieu of Law (Peraturan Pemerintah Pengganti Undang-Undang/Perppu) No.1 Year 2015 as a follow-up to the determining of two anti-graft commission (Corruption Eradication Commission/Komisi Pemberantasan Korupsi/KPK) Commissioners as suspects, namely Bambang Widjojanto and Abraham Samad. The vacant commissioner’s seat, according to the President, disrupts the mechanism in the anti-graft commission. This became one of his considerations to issue the Perppu. President Joko Widodo named Taufiqqurahman Ruki (Former KPK Commissioner of 2003—2007), Indriyanto Seno Adjie (criminal law professor and lawyer) and Johan Budi (KPK Prevention Unit Head) as ad interim commissioners. This situation reminds us of the event in 2009, when then-President Susilo Bambang Yudhoyono (SBY) issued a similar Perppu in the case of the criminalization of KPK Commissioners Bibit Samad and Chandra Hamzah. During that time, only two KPK commissioners, M Jasin and Haryono Umar, were left, because the other KPK leader, Antasari Azhar, has been deactivated since being convicted of. SBY, through Presidential Decree No. 27 Year 2009, selected Tumpak Panggabean, Mas Achmad Sentosa and Waluyo to fill in for Antasari, Chandra, and Bibit.

Both the Perppu issued by Joko Widodo and SBY are similar. Both equally added two articles between Article 33 and Article 34, namely Article 33A and Article 33B regarding the President’s authority to appoint ad interim Commissioners. The difference is, in the Perppu issued by  Joko Widodo there are additional requirements of 65 years as the maximum age. Additionally, Joko Widodo’s Perppu did not include the explanation of Article 33A paragraph (1). SBY’s Perppu was rejected by seven of the nine factions in Commission III of the Parliament. The reason for the rejection, according to the Parliament, is the absence of an emergency situation that should initiate the Perppu in the first place.

President Joko Widodo should have reflected on the 2009 Bibit-Chandra case. The police determination in targeting KPK commissioners and officials as suspects should not be considered as business as usual, rather a systematic criminalization. According to Perppu No. 1 Year 2015 which authorizes the President to appoint temporary KPK commissioners reinforces the message that there is no criminalization by the police. Instead of showing impartiality in the eradication of corruption, with the Perppu, the President seems like sending the message of legitimizing KPK criminalization. (ED)