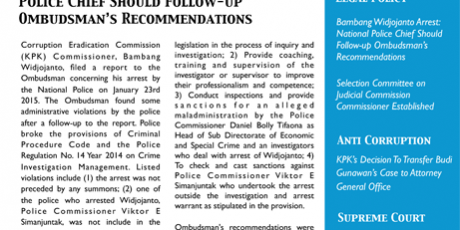 Corruption Eradication Commission (KPK) Commissioner, Bambang Widjojanto, filed a report to the Ombudsman concerning his arrest by the National Police on January 23rd 2015. The Ombudsman found some administrative violations by the police after a follow-up to the report. Police broke the provisions of Criminal Procedure Code and the Police Regulation No. 14 Year 2014 on Crime Investigation Management. Listed violations include (1) the arrest was not preceded by any summons; (2) one of the police who arrested Widjojanto, Police Commissioner Viktor E Simanjuntak, was not include in the arrest warrant;  (3) arrest warrant wrongly addressed the identity of Widjajanto and did not elaborate qualification as a suspect. In addition to the arrest, the search at the Widjojanto’s house was done without any permission from the  District Court Chairman which is compulsory in a search warrant.

Ombudsman followed up the findings by pointing out a number of recommendations: 1) Order Head  of The National Police Detective Division Chief and his staffs to comply with the legislation in the process of inquiry and investigation; 2) Provide coaching, training and supervision of the investigator or supervisor to improve their professionalism and competence; 3) Conduct inspections and provide sanctions for an alleged maladministration by the Police Commissioner Daniel Bolly Tifaona as Head of Sub Directorate of Economic and Special Crime and an investigators who deal with arrest of Widjojanto; 4) To check and cast sanctions against Police Commissioner Viktor E Simanjuntak who undertook the arrest outside the investigation and arrest warrant as stipulated in the provision.

Ombudsman’s recommendations were submitted to the President, Police Officers, Commission II and III of The House of Representatives with Widjojanto as rapporteur. According to Article 38 paragraph (1) and paragraph (2) of Law No. 37 Year 2008 on the Ombudsman, the reported supervisor shall submit a report to Ombudsman on the implementation of the recommendations within  60 days. In this case, National Police Chief must immediately act, remembering that until today there is no clarity regarding the follow-up to the Ombudsman recommendations.(ED)

According to Law No. 18 year 2011 on Judicial Commission and the Consitututional Court Decision No. 16/PUU-XII/2014, the Selection Committee duties are: a. Announced registration of Judicial Commission member canditates, b. Process the registration and select future members based on the integrity quality c. To sent seven names as candidate for the Judicial Commission to the President. For the next stage, the President will seek approval to the House of Representatives. The selected candidates consist of 2 former judges, 2 legal practitioners , 2 legal academics, and 1 member of the community.

In addition, the Act also requires the selection committee for work professionally and involving the public. It is highly expected that the Selection Committee (Pansel) has clear indicators what quality and potential they seek for the future Judiciary Commision candidates. Another significant element is open wider opportunities for public participation to contribute during the election, in order to compile relevant references related to candidates’ track record more comprehensively and validly. Such measures are necessary to establish a commisioner with the ability to conduct external surveillance on code of ethics and conduct for judges. (RW)

On Monday (2/3) Attorney General, acting Chief of National Police, and acting Chairman of Corruption Eradication Commission (Komisi Pemberantasan Korupsi/KPK) held a meeting to discuss  Comr.Gen (Pol) Budi Gunawan case, a suspected in bribery and gratification cases handled by KPK. The Minister of Justice and Human Rights and Coordinator Minister of Political, Law, and Security all attended the meeting. The decision to transfer Budi Gunawan case from the KPK to the Attoney General Office originated in the meeting. One of the basis to transfer Budi Gunawan’s case is the verdict of the pretrial that stated KPK did not authorized to handle Budi Gunawan’s case; since the case started during his career as Head of Career Development of National Police.

If KPK’s cessation are going to be rejected, there is also legal initiative can be taken by KPK, which is Case Review. On the other hand, there is Government Regulation No. 3/2003 on the Implementation of Technical Institutional in General Judicial for Members of National Police that gave authority to the police to investigate criminal cases performed by their personnel.

By transfering of Budi Gunawan’s cases to Attorney General Office and so forth to the National Police; it will gain impact on two things. First, there are high potential of conflict of interest and the National Police tendency to terminate their investigation against Budi Gunawan. Moreover, in Law No. 30/2002 on Corruption Eradication Commission, there is no obligation from KPK to transfer their cases to the other institution. (MSG)

“Sarpin Effect” and Its Completion

The ruling of pretrial case between Commissioner-General Budi Gunawan (BG) against Corruption Eradication Commission (KPK) has brought spotlight to  Indonesian law enforcement process. Sitting as a single judge, Sarpin Rizaldi, on February 152015 has decided to receive BG pretrial case whereas the Criminal Procedural Law has their limit that suspect status is not part of a pretrial jurisdiction. Judge Sarpin the KPK decision to make BG as suspect is against the law. The judge said, based on the law, KPK has the authority to conduct an investigation on corruption by state officials or law enforcers, but in BG case, since he was at that time served as Chief of Career Development Bureau (Kepala Biro Pengembangan Karir), which is one level below the 2nd echelon position. According to Police Chief Decree,  BG’s position is an administration one, therefore the judge argue that he was not a law enforcer at the time. Judge Sarpin also stated that BG is not a state officials that could be investigated by KPK because the law regulate that state officials is someone in the 1st echelon position. Relating to Sarpin’s ruling, there are two matters could be highlighted. First,  Judge Sarpin has clearly beyond his authority to assess BG status as state official or law enforcer, since  status assessment is not the subject of pretrial process but regular trial instead. Second, Judge Sarpin argument to consider BG’s status not as law enforcer seemingly hard to understand because according to article 2 of Law no 2 Year 2002 on Indonesian National Police it is clearly stated that police is a law enforcer.

The impact of this decision is fatal for judicial practice. “Sarpin effect” has appeared with many of pretrial cases relating to the determination of suspect status. Sutan Bhatoegana’s and Suryadharma Ali’s, former Member of The House of Representatives and former Minister of Religious Affairs, are having their pretrial case against KPK

Despite all the debates, Judge Sarpin has decided that KPK investigation on BG case is against the law. But, KPK shouldn’t be silent in responding the ruling. The act of silent will be interpreted as confirming the misapplication of law done by Sarpin.  KPK should take steps to file an appeal against Sarpin decision through cassation (kasasi) or case review (peninjauan kembali) to the Supreme Court. Such steps is important, because it open the opportunity for The Supreme Court to conduct their duty to maintain the unity of the application of law. Such duty known by the Supreme Court role as “judex jurists” which assesses law applied ​​by the lower Court. Furthermore, KPK’s decision to transfer the case will not lead to anything other than public disappointment. It means risking the spirit of combating corruption which has been supported and protected by public. (MS)

Right to Inquiry towards Jakarta’s Governor

Last week, the Jakarta City Council (DPRD) launched the right of inquiry (hak angket) in order to conduct investigation towards Jakarta Governor Basuki Tjahaja Purnama. Basuki is alleged violates procedure for proposing wrong Jakarta’s budget plan to the Ministry of Home Affair. According to Basuki, there is a fictitious allocation of Rp 12.1 trillion in the Rp 90 trillion draft budget, which was agreed upon City Council. Therefore, Basuki then submitted his ‘e-budgeting’ version with the amount of Rp 78 trillion. Not only that, Basuki also report the City Council to the Anti-Corruption Commission (KPK) for alleged abuse of local budget.

Retaliating the attack by the governor, the City Council then decided to use its right to investigate alleged violation committed by Basuki. City Council Speaker Prasetyo Edi Marsudi stated that the main reason of launching the right of inquiry is because the draft budget submitted to the Ministry of Home Affair is different with the one agreed between the governor and the City Council. Article 106 paragraph (3) of the Law on Local Government determines that the right of inquiry may be used to conduct an investigation into the provincial government policies that are strategically important and far-reaching impact on the lives of communities, regions, and countries that allegedly contrary to the laws and regulations.

Besides investigating the problem on budget submission, the City Council also considers Basuki’s behavior as a ground of proposing the right to inquiry. Prasetyo reminds Basuki to keep his manner while building communication with the City Council, including in the budget submission matter. Many commentators and academics believe that the right to inquiry towards Basuki more based on personal dislike of most of the City Council members to Basuki, rather than on the question of the budget. Regarding this, the Law on Local Government actually has been providing the right of interpellation (hak interpelasi) instrument to address the issue of inter-institutional communication in local government. The City Council may use this right to request information or ask the governor about a particular policy.