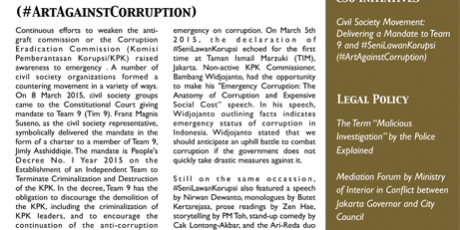 Continuous efforts to weaken the anti-graft commission or the Corruption Eradication Commission (Komisi Pemberantasan Korupsi/KPK) raised awareness to emergency . A number of civil society organizations formed a countering movement in a variety of ways. On 8 March 2015, civil society groups came to the Constitutional Court giving mandate to Team 9 (Tim 9). Franz Magnis Suseno, as the civil society representative, symbolically delivered the mandate in the form of a charter to a member of Team 9, Jimly Asshiddiqie. The mandate is People’s Decree No. 1 Year 2015 on the Establishment of an Independent Team to Terminate Criminalization and Destruction of the KPK. In the decree, Team 9 has the obligation to discourage the demolition of the KPK, including the criminalization of KPK leaders, and to encourage the continuation of the anti-corruption agenda. Public disappointment towards President Jokowi’s lack of spirit in solving KPK-Polri cases triggered the initiative of giving the mandate to the Team 9.

Meanwhile, the Jakarta Arts Council (Dewan Kesenian Jakarta/DKJ) along with the Indonesian Arts Coalition (Koalisi Seni Indonesia/KSI) initiated #ArtAgainstCorruption (#SeniLawanKorupsi) as an effort to revive public awareness regarding the state of emergency on corruption. On March 5th 2015, the declaration of #SeniLawanKorupsi echoed for the first time at Taman Ismail Marzuki (TIM), Jakarta. Non-active KPK Commissioner, Bambang Widjojanto, had the opportunity to make his “Emergency Corruption: The Anatomy of Corruption and Expensive Social Cost” speech. In his speech, Widjojanto outlining facts indicates emergency status of corruption in Indonesia. Widjojanto stated that we should anticipate an uphill battle to combat corruption if the government does not quickly take drastic measures against it.

Still on the same occassion, #SeniLawanKorupsi also featured a speech by Nirwan Dewanto, monologues by Butet Kertarejasa, prose readings by Zen Hae, storytelling by PM Toh, stand-up comedy by Cak Lontong-Akbar, and the Ari-Reda duo sang their rendition of famous Indonesian poems by Sapardi Djoko Damono. #SeniLawanKorupsi also exhibited posters, murals, and graphics. Numbers of art communities and artists participated in the first #SeniLawanKorupsi event, including Card to Post, Space Art, ruangrupa, Creative Circle, Serrum, Pabrikultur, and several others. Just like they said in the #SeniLawanKorupsi declaration; “we fight by creating a path, and our path is the way of art.” (ED)

The Term “Malicious Investigation” by the Police Explained

The term “criminalization” has become more and more familiar to the public. Although, theoretically, the term is incorrect in describing what is happening to the commissioners, staff, and investigators of the Corruption Eradication Commission (Komisi Pemberantasan Korupsi/KPK), as well as anti-corruption figures such as the former head of the anti-money laundering unit, Yunus Husein, or the former deputy of the Minister of Law and Human Rights, Denny Indrayana. If one wanted to use the term correctly, it should be used to define the policy making process in criminal law in order to push a certain kind of action registered as criminal act. The term “case fabricating” or ‘rekayasa kasus’ also considered inaccurate since the event in some cases indeed accurate but the facts concerning the case are not. Or what really happened was the other way around; that the facts are correct but the event is not.

In broad strokes, malicious investigations did not only happen recently to KPK officials. The trend is rising, according to Jakarta Legal Aid (LBH Jakarta) data, and is done by the police. Unfortunately, the Indonesian legal system has not yet addressed this. The pretrial mechanism is limited and unable to reach those cases. This makes the revision of the criminal procedure a must and along with it, the police reform agenda should be initiated. (MSG)

The past week’s events between Governor Basuki Tjahaja Purnama, or ‘Ahok’, and Jakarta’s City Council on the legalization of the 2015 local budget are quite unorthodox. Before the event came to light, the public has never before heard of any conflict relating to the budgeting function. The absence of news regarding the budgeting conflict should not be interpreted as there being no conflict whatsoever. In the 2015 budgeting rift between Ahok and the City Council, problems arose with a mark-up indication and local spending budget which has never been discussed between the Governor and the Council.

According to Law No. 23 Year 2014 on the Regional Government, it clearly states that the Governor is authorized to draft and submit the local budget as a local regulation. Meanwhile, the local parliament (or in this case the Jakarta City Council) negotiates and gives their agreement to the budget. It means that there should be only two versions of the proposed budget; the initial budget from the Governor and the final one after being discussed with the local parliament or city council. Still according to Law No. 23 Year 2014, if within one month before the designated year (which means 2015) there is no consensus upon the budget by the Governor and the local parliament, the Government will use last year’s budget instead. Any proposed draft from this point will need approval from the Ministry of Interior, from which the Minister will have 15 days to approve. If up until 30 days the Ministry does not respond, the proposed draft will be consider ready to be executed. In conclusion, the greatest possibility is for the Governor to initiate drafting the budget and wait for the Ministry’s approval.

All the while, we should appreciate the initiative taken by the Ministry of Interior to mediate the rift between Governor Ahok and Jakarta’s City Council. But admittedly, while trying to implement his agency mandate according to Article 8 and 373 from Law No 23 Year 2104, his attempt on 5 March 2015 did not succeed. It is important to cap the conflict between Jakarta’s Governor and City Council in order to establish the continuation of Jakarta’s development as planned. (MS)