Understanding Policymaking In Indonesia: In Search of a Policy Cycle

You are here:
PenelitianPenelitian Saat Ini 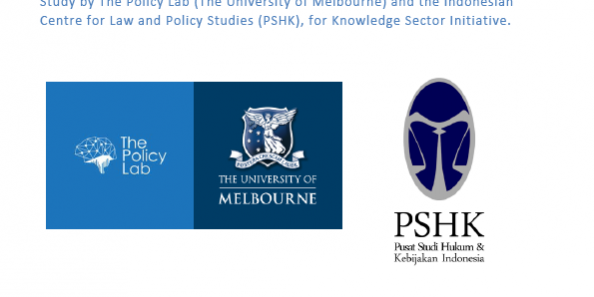 Study by The Indonesian Center for Law and Policy Studies (PSHK), The Policy Lab The University of Melbourne and Knowledge Sector Initiative (KSI).

Public policymaking is widely understood as a structured and logical process of problem solving led by the government. But is there really a ‘policy cycle’ in practice? In the context of Indonesia’s complex policy challenges and political contestation, is it feasible to speak of such a cycle? The aim of the paper is to provide a more informed understanding of how policymaking works in practice in Indonesia, and to explore the relevance of the policy cycle model in this context. The Policy Lab at The University of Melbourne, in collaboration with PSHK – the Indonesian Centre for Law and Policy Studies – led this study on the policymaking process in Indonesia for the Knowledge Sector Initiative (KSI) from April to June 2017.

This paper draws on academic and practice-based literature, consultation with experts on public policy in Indonesia, and six vignettes of different types of policy process. The paper supplements existing knowledge with greater attention to the development and implementation of policy in Indonesia. The model of a policy cycle – a sequential process where policy is developed logically in response to a perceived problem – is criticised by scholars and practitioners for the assumption that decision making is purely rational. Policy making takes place in complex political environments, where distinct stages in the policy cycle may not be evident, may overlap or be intertwined, and in some cases may be missing entirely. Meanwhile, within Indonesia, scholars identify the roles of actors at different levels (national and subnational) within and outside government, as well as policy activities and patterns of decision making that challenge straightforward notions of a policy cycle.

This paper examines instances of policymaking in Indonesia by all three branches of government – the executive, legislature and judiciary – as well as highlighting input from non-governmental actors. The selected six examples of policymaking relate to the Civil Service Law, management of traffic violation cases, establishment of the small claims procedure, Law on Persons with Disabilities, research procurement regulation, and Village Law. The paper describes how policy activities aligned, and did not align, with the policy cycle as an eight step process from agenda setting to policy evaluation.

The strongest pattern in the examples is an agenda-setting phase at the start of the policymaking process. Civil society organisations and the media appear to play a particularly important role in creating public awareness of issues. While the executive is often assumed to play a key role in policy analysis and formulation, in these examples they were more likely to be performed by the legislative branch or non-governmental actors. There was little evidence that the government would first analyse an issue before a policy decision would be made. In addition, policy instruments tended not to be designed based on the most rational means to achieve a high level strategy. Rather, the instruments seemed to be selected before any policy analysis took place. Further, consultation about policy was often not between citizens and the state, but rather through internal government actors consulting with each other, or civil society organisations leading public discussions with particular communities or stakeholders. Policy coordination did not necessarily wait until a policy document had been prepared. Rather than there being a single point of policy decision making, our examples demonstrate many points of decision, which represent different ‘gates’ through which a law must pass before becoming an enacted policy. Even after a law has been approved by Parliament and the President, it may not be implemented completely. One aspect of a policy may be implemented, for instance, while the broader approach stalls. Finally, our examples show very little policy evaluation and monitoring, except that done by non-governmental organisations.

The general process of policymaking in Indonesia cannot accurately be represented as a cycle underpinned by rational problem solving. Further investigation into the practice of policymaking in Indonesia should help to create a more nuanced picture of how policies are really made. Gaining a better understanding of Indonesian policy networks could further uncover who is involved in the process, what evidence they use, and how they are able to influence debates and negotiations on particular issues.