You are here:
Aktivitas 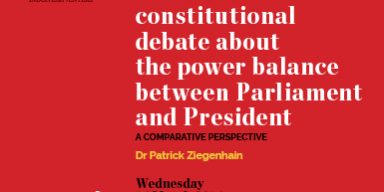 The Indonesian Constitution has been in question again lately on how it was designed to put power balance between the president and the parliament. During the period of the amendment in 1999-2002, the ideas to provide more power to DPR as the representatives of the people and to implement presidential system more consistently by abolishing MPR as the supreme body of the country were taken into the amendments. However, questions aroused lately on the power of the DPR, as the elected members and the political parties did not fulfill their expected roles adequately. Recently, certain political groups proposed that the government has to follow long-term development guidelines such as the GBHN that Indonesia used to have in the original text of UUD 1945. In his presentation, Dr Patrick Ziegenhain will analyze the constitutional set-up of the Indonesian executive-legislative relations from an international comparative perspective and will draw conclusions on the effects of possible constitutional amendments.

Since 2005, Patrick Ziegenhain holds a PhD in Political Science from Albert-Ludwigs-University in Freiburg/ Germany. Beside numerous academic articles, he is the author of the books “Institutional Engineering and Political Accountability in Thailand, Indonesia, and the Philippines” (2015), “The Indonesian Parliament and Democratization” (2008) and co-author of the book “Parliaments and Political Change in Asia” (2005).”