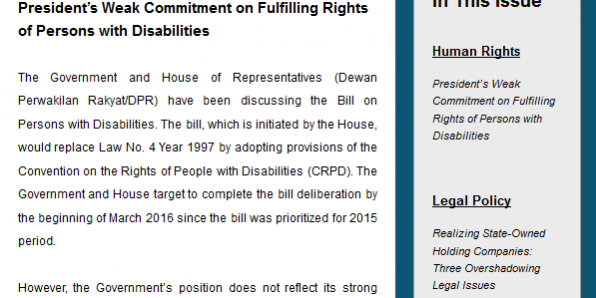 President’s Weak Commitment on Fulfilling Rights of Persons with Disabilities

The Government and House of Representatives (Dewan Perwakilan Rakyat/DPR) have been discussing the Bill on Persons with Disabilities. The bill, which is initiated by the House, would replace Law No. 4 Year 1997 by adopting provisions of the Convention on the Rights of People with Disabilities (CRPD). The Government and House target to complete the bill deliberation by the beginning of March 2016 since the bill was prioritized for 2015 period.

However, the Government’s position does not reflect its strong commitment of supporting the inclusive environment for the persons with disabilities. The president gave several responses to the bill, namely questioning the 2% quota for persons with disabilities to be employed, rejecting the concession facilities for access to public services for people with disabilities, insisting on making the Ministry of Social Affairs as the single leading sector of disability issues acting as the sole institution performing data collection, and rejecting to establish an independent National Commission on Disabilities.

First, Law No. 19 Year 2003 on State-Owned Enterprises (SOE) defines the SOE as a business entity owned by the state through direct equity participation. This means that SOE does not include subsidiaries of the holding company. Second, the contentious issue of the SOE’s state asset. Although the Constitutional Court in 2013 decided that the loss of state assets in SOEs is categorized as an object in corruption law, some legal scholars argue the contrary. Third, the formation of state-owned holding companies has potential to cause unfair competition practices such as oligopolies, zoning, trust, vertical integration, ownership, as well as mergers, consolidations, and takeovers.

Regarding those legal issues, the proposed measures that could be done by the Government and House of Representatives are as follows. First, if the Government would like to recognize state-owned holding subsidiaries as SOE, the revision of the SOE Law is a necessity. The definition of SOEs should be revised, otherwise the revision is not necessary if the Government would like to recognize state-owned holding subsidiaries as private companies. Second, it is necessary to set a clearer definition on the limitation of state finances and state assets in SOEs that has been provided in three different legislations, namely the Law on State Finance, Law on State Treasury, and Law on State Audit. Lastly, the Government should ask and consult with the Commission for the Supervisory of Business Competition (Komisi Pengawas Persaingan Usaha/KPPU) whether or not the establishment of state-owned holding companies will affect the issue of unfair competition. (MFA/CC)

The government has issued the tenth economic policy package. This time, the government has opened and increased the allocation of foreign ownership of 35 business sectors, including crumb rubber, e-commerce, highways, and cinemas. This policy continues to expose Indonesia towards the presence of foreign ownership. The main reason is to improve competitiveness of national industries.

No great controversy follows over this open-door policy. Nevertheless, this policy should be implemented with a precautionary principle in order to protect small and medium enterprises (SME). Efforts to encourage national industrial competitiveness must not disregard the protection of the SME business sector.

Unfortunately, this policy still leaves classic issues unresolved, namely regarding the separation of regulatory regimes on Foreign Direct Investment (FDI) and Foreign Portfolio Investment (FPI). The policy does not mention this classical issue. During the discussion process on the policy making of the negative investment list, The Investment Coordinating Board (Badan Koordinasi Penanaman Modal/BKPM) and capital market authorities had different views on regulatory regimes of FDI and FPI. BKPM views that FDI and FPI should not be treated separately, while the capital market authorities view the opposite. Law No. 25 Year 2007 on Investment and Presidential Regulation No. 39 Year 2014 on the Negative investment List separate regulatory provisions for FDI and FPI. This separation regime has been used by foreign companies to enter and invest in the business sectors formerly closed to foreigners, such as what happened in the case of Blitz Megaplex, a movie theater company.

Departing from the case, FDI and FPI should not be treated separately. To that end, the Investment Law and the negative investment list should accommodate this issue to close the loophole on FDI and FPI regulations. (MFA)